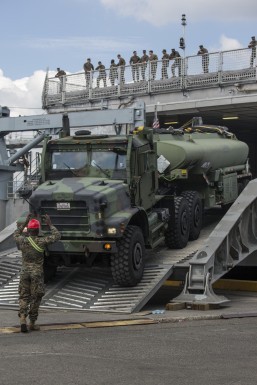 Manila, Philippines | AFP |   – Thousands of US and Filipino soldiers will on Monday launch annual war games that this year are being seen as a show of strength in the face of China’s increasing assertiveness in the region.

The 11-day Balikatan (shoulder-to-shoulder) exercises are expected to show how the Philippines, though severely outgunned, can counter China with the help of the United States, its longest-standing ally.

China has in recent months built massive structures including radar systems and an airstrip over reefs and outcrops in the contested South China Sea, sparking international concern.

Beijing lays claim to almost all of the waters, which are important for international shipping and believed to hold valuable mineral and energy deposits, and neighboring countries fear China could impose military controls over the entire sea.

The joint maneuvers come ahead of a decision this year by a United Nations-backed tribunal on a legal challenge by Manila to China’s territorial claims.

Adding to the tensions, the Philippines is preparing to host US troops in five bases under a defense pact born out of US President Barack Obama’s plan to reassert American influence in the Pacific.

Balikatan has evolved from counter-terrorism maneuvers against Islamic extremists like the Philippines’ Abu Sayyaf, to simulations of retaking and protecting territory as disputes with Beijing have escalated.

However, Filipino and US officials insist the exercises are not explicitly aimed at China.

Balikatan spokesman Captain Celeste Frank Sayson said 55 US aircraft would take part in the drills, while the Philippines will deploy fighter jets it has recently acquired.

While no specific staging areas have been disclosed, the two allies have in recent years held war games at air bases just 230 kilometers (140 miles) from the disputed areas in the South China Sea.

Rene de Castro, an international studies professor at the De La Salle University in Manila, told AFP the drills appeared to have China’s expansion in the South China Sea in mind.

“Looking at the features of Balikatan – the mobile missile-launchers, the fighter planes—that is an indication that the alliance is being geared for territorial defense,” he said.

Richard Javad Heydarian, a political science professor at the De La Salle University in Manila, added that the exercises “aim to enhance interoperability among allies nations and signal their preparedness to confront China if necessary”.

The Philippine military said the US High Mobility Artillery Rocket System (HIMARS), designed to shoot down aircraft, will be sent to Palawan, the Philippines’ westernmost island on the South China Sea, during the war games.

The Philippines operates one airstrip in the South China Sea, on Thitu island, where there are around 350 civilian residents.

The Philippines, which has one of the weakest militaries in the region, has sought to counter China’s overwhelming military advantage by improving ties with the United States and Japan.

While it has acquired new fighter jets and surplus US naval ships, the Southeast Asian nation still has far to go, De Castro warned.

China’s defence budget dwarfs that of the Philippines and Beijing is this year set to outspend its smaller neighbor by a factor of around 60.

The Philippines is also increasing its military engagements with the US with the Enhanced Defence Cooperation Agreement, which took effect in January.

Under the deal, US troops will rotate through five military camps including two air bases that are strategically positioned near the South China Sea.

“It is very apparent that the thrust of (the agreement) is air power,” said former national security adviser Roilo Golez.

Australia, which recently criticized China’s assertiveness in the disputed waters, is sending 80 troops to join parachute drills as part of the maneuvers, Sayson said.

Tensions have flared between the superpowers since the US sent warships close to disputed islands twice in the past six months.