US to issue new Elvis stamp 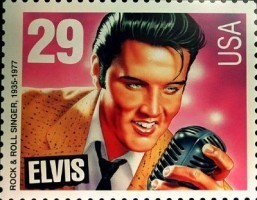 This June 4, 1992 file photo shows the commemorative stamp bearing the likeness of a youthful Elvis Presley. The US Postal Service on June 3, 2015 announced a new stamp of Elvis Presley, two decades after a first version depicting “The King” caused a sensation
©FILES / AFP

(New York-AFP) – The US Postal Service on Wednesday announced a new stamp of Elvis Presley, two decades after a first version depicting “The King” caused a sensation.

The Postal Service is returning to Elvis as part of its Music Icon Series launched in 2013, which has included stamps featuring Ray Charles, Jimi Hendrix, Janis Joplin and other legends.

Postmaster General Megan Brennan called Elvis “a natural addition” to the series, saying that his story from humble roots to rock stardom “continues to resonate with millions the world over.”

The previous Elvis stamp in 1993 became one of the US Postal Service’s most talked about ever.

In a successful bid to generate a buzz, the Postal Service asked the public in 1992 to vote between images of a dashing young Elvis and an older, chubbier one, while some conservative detractors opined that the singer known for his addictions and suggestive pelvis thrusts did not deserve a stamp at all.

The young version overwhelmingly won after a public campaign that notably included an endorsement from then presidential candidate Bill Clinton, an Elvis fan who himself campaigned on a theme of generational change.

The Postal Service did not immediately unveil the latest stamp but said it would be dedicated on August 12 at Elvis’ Graceland estate, part of annual events around the anniversary of his death in 1977.

Stamps and other product sales are critical for the US Postal Service, which has suffered years of financial woes and does not receive taxpayer money to operate.

Would you send your dog’s ashes into space?

100% of new Ferraris are personalized