US private job creation falls in May: ADP 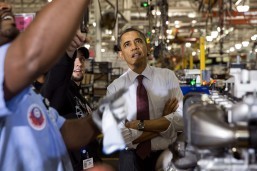 WASHINGTON (AFP) – The US private sector churned out a net 179,000 new jobs in May, a disappointing fall from April, payrolls company ADP said Wednesday.

It was the lowest level in four months, and suggested US economic growth remains in second gear.

The May figure was down 36,000 positions from April’s total, with a sharp slowdown in the number of new jobs coming in the professional and business services sector. Hiring remained slow, as well in trade and transportation, and in construction.

Even so, he added, “the 179,000 jobs-added figure is higher than May of last year and in line with the average over the past twelve months.”

Ian Shepherdson of Pantheon Macroeconomics called the ADP data “curious” and inconsistent with the signs of a stronger jobs market that come from other data on the economy.

He said that the government’s official report on the jobs market in May should be more buoyant, showing a firm 230,000 new jobs generated by the private sector and government when it comes out on Friday.

Metro Manila returning to MECQ not a ‘foregone conclusion’ –Palace

International tourism up 5 percent in 2014: UNWTO