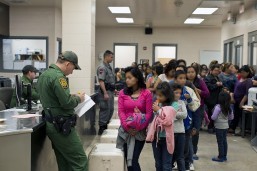 Los Angeles, United States | AFP |   – At least 244 people were arrested across southern California in a broad, four-day sweep of immigrants with criminal records staying in the country illegally, US authorities said Monday.

The large operation, which ended Thursday, is the most successful of its kind in the region, Immigration and Customs Enforcement said.

Most of those detained – 191 – are originally from Mexico, though the others came from 20 other countries, including Ghana, France, Peru and Thailand.

The majority (56 percent) had been previously convicted of serious crimes such as child abuse, drug violations and weapons charges.

Four of those arrested were previously deported and had re-entered the country, including a man convicted in 2002 of sexual abuse with force and another who had been previously sentenced to 10 years in prison for sexually abusing two children.

Suspects with outstanding orders of removal, or those who returned to the United States illegally after being deported, can be immediately removed from the country.

“By taking these individuals off our streets and removing them from the country, we are making our communities safer for everyone.”