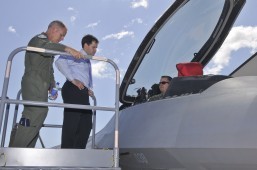 US Senator Marco Rubio, a member of the so-called “Gang of 8” crafting legislation to reform the current immigration system, during an undated visit at Tyndall Air Force Base near Panama City, Florida.

In a letter marking the 26th anniversary of the military’s deadly crushing of pro-democracy protests in central Beijing, Rubio and congressman Christopher Smith also urged Xi to release all prisoners of conscience prior to his September visit to the United States.

They noted the arrest of hundreds of people in the past two years on “trumped-up charges” including illegal assembly, which contradict China’s constitutional guarantees of free speech.

Issues surrounding the June 4 anniversary are “symptomatic” of broader concerns that persist 26 years later, according to the two Republicans, who chair the Congressional Executive Commission on China.

“These concerns include, but are not limited to, your government’s persistent and intense efforts to suppress civil society and human rights defenders and the growing number of individuals arrested, harassed, and detained for peacefully exercising their right to the freedoms of expression, association, assembly, and religion,” they wrote Xi.

“The continued detention of prisoners of conscience and suppression of their legitimate and peaceful activities is a barrier to closer cooperation and efforts to build mutual trust and understanding.”

The letter follows a Wednesday statement by the State Department, which said Washington “continues to call for an official accounting of the victims of these events, the release of those still serving Tiananmen-related sentences, and an end to the harassment and detention of those who wish to peacefully commemorate the anniversary.”

In May, Xi told Secretary of State John Kerry that ties between the world’s two biggest economies were “stable” despite tensions in the South China Sea over Chinese island-building in strategic but disputed waters.