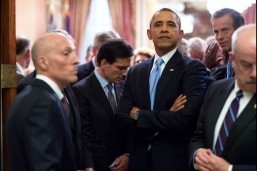 President Barack Obama waits with Sergeants at Arms and Members of Congress before entering the House Chamber to deliver the State of the Union address at the U.S. Capitol in Washington, D.C., Jan. 28, 2014 Standing with the President are, from left: Paul Irving, House Sergeant at Arms; House Majority Leader Eric Cantor, R-Va.; Sen. John Thune, R-S.D.; and Terrance Gainer, Senate Sergeant at Arm

Faced with the need to act before fiscal year 2015 begins on October 1, members of the House of Representatives voted 319-108 to keep government funded at current levels until December 11.

The Senate takes up the measure Thursday, and despite deep differences between President Barack Obama’s Democrats and opposition Republicans over federal spending, senators are expected to pass the so-called continuing resolution.

Senate Majority Leader Harry Reid and Minority Leader Mitch McConnell – one of Obama’s chief adversaries in Congress – have bickered incessantly for the past year, but the leaders appeared united in their desire to see the resolution reach the president’s desk.

It is essentially a punt, as lawmakers – faced with mid-term congressional elections in early November – have failed to pass legislation laying out next year’s spending levels before fiscal year 2014 ends September 30.

Lawmakers have spoken repeatedly of the need to pass the 12 separate appropriations bills once Congress resumes its work after election day.

Number two House Democrat Steny Hoyer said he was grateful that Republicans, widely blamed for the 16-day shutdown last year, were not prepared to push the government to the brink.

“I think they’re making a wise decision,” Hoyer said on the House floor.

In addition to being a short-term funding fix, the continuing resolution also provides for $88 million in funding to address the Ebola epidemic in west Africa, re-authorizes the Export-Import Bank, and crucially provides Obama’s Pentagon with authorization to train and arm moderate Syrian rebels in order to battle Islamic State jihadists.

Good at multitasking? Doubtful, according to new study

Obama struggles for deterrence amid wave of cyberattacks