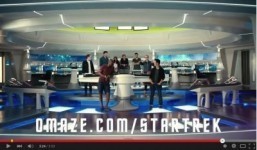 (Relaxnews) – Star Trek fans can now boldly go where they never thought possible — onto the set of the upcoming film.

As part of the “Star Trek: To Boldly Go” campaign, the cast has teamed up with Omaze to combine their support for nine global causes with the ultimate fan experience. The cast’s causes will receive an equal portion of the funds raised when fans enter the contest campaign. The prize is a walk-on role in “Star Trek Beyond,” the third film in the series.

The winner and guest will also be flown to Vancouver, win a stay in a 4-star hotel and get a behind-the-scenes look at filming.

Star Trek fans can enter to win the contest through 11:59 pm PST on September 1, by visiting the Omaze website.

‘The Mummy’ resurrection delayed due to ‘Huntsman’