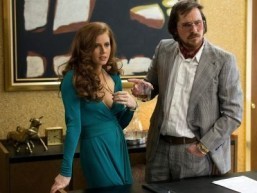 ABC’s “Good Morning America” was the first to get its hands on a preview of “American Hustle.” The 1 minute, 30 second clip leaves us in the dark regarding the plot and focuses instead of conveying an atmosphere: the costumes, the cars, the superficially cool attitudes and the soundtrack of Led Zeppelin’s “Good Times, Bad Times” all place the film firmly in the ambience of the late 1970s.

Known for his skill at adapting his body to different roles, Christian Bale has taken on a few extra pounds to play a charismatic crook forced to work with an FBI agent, portrayed by Bradley Cooper. Taking on light New Jersey accents, the actors will bring a true story to the screen. “American Hustle” depicts Abscam, one of the largest corruption cases of the second half of the 20th century, which went down in Atlantic City.