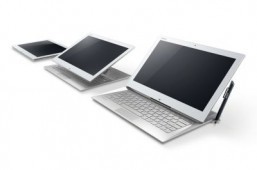 Sony Vaio Duo 13 Ultrabook
The Sony boasts an ambitious design, great battery life and premium build quality but its sliding screen may not be suitable for everyone.
©Sony

Microsoft Surface Pro
The Surface Pro is a fabulous computer in all but two respects, the keyboard is actually a $120 cost option and its battery life is a bit low compared with its competition.
©Microsoft

(Relaxnews) – According to an annual study commissioned by TeamViewer, 61 percent of Americans claim that they will have to do some form of work while on vacation (up from 52% in 2012) even though it is meant to be a time for relaxation and recharging the batteries. Over two thirds of respondents (69%) admitted that a “work-capable” device will be one of the items packed into a suitcase this summer and only 13 percent claimed that they would be switching off all devices altogether for the duration of the vacation.

So, if you’re in that unfortunate 62 percent or are just looking for something that’s light enough to throw into a bag that’s powerful enough to begrudgingly get some work done yet is practical enough to double up as a form of entertainment system when a storm front moves in and the family are all confined to a hotel, here are three ultra light computers that are a joy to use even if in doing so, you are reminded of the office, rather than the beach.

Sony Vaio Duo 13 Ultrabook from $1399.99
The Japanese tech company describes the VAIO Duo’s design as a ‘Surf Slider,’ in other words, a clever hinge joining the screen to the keyboard that can fold and slide backwards upon itself so that the display can either be tilted at an angle in ultrabook mode — a great viewing angle for watching films too — or folded down over the keyboard, turning the device into a 13.3-inch Windows 8 tablet with stylus support. As well as a strong focus on design, the computer is also about ease of use. Detaching the stylus automatically launches a note-taking app, even if the device is in sleep mode. Its front-facing camera is optimized for facial recognition so there’s no need to log in, in order to jot something down when inspiration strikes. Thanks to the latest generation of Intel Haswell chip, Sony claims that the VAIO 13 Duo is good for 15 hours’ use between charges.

The Microsoft Surface Pro from $899 without touch cover
Ok, there are other Windows 8-enabled hybrid devices on the market but the Surface Pro is still the best in terms of quality and execution. OK, it’s a little heavier than an ultrabook but its 10.1-inch full HD screen is wonderful for multimedia and a detachable keyboard is a better solution than a swiveling or tilting screen for activating tablet mode. It’s a little heavy to hold in a single hand for a long time but it is a very competent Windows PC. However, that power comes at a price — battery life which is only two to four hours. As well as standard touch, like the Sony the Surface supports stylus input, great for jotting down presentation notes while reclining next to the pool and the built-in kickstand means that it can be perched easily on the edge of a cafe bar counter for use in computer or tablet mode.

MacBook Air from $999
Ok, it doesn’t have a touchscreen interface or even a full HD screen, but what Apple’s lightest notebook does have is a full day’s use between recharges thanks to the latest generation of Intel Haswell chip and a choice of screen sizes — 11- or 13-inch. The computer is also superlight and ergonomically perfect for typing. It also has a Magic Trackpad which enables iPhone and iPad-type multi-touch commands, and supports Thunderbolt technology, meaning that it can be paired with practically any peripheral that supports the Thunderbolt protocol, from docking stations to UHD monitors and even professional standard graphics chips. However, for newcomers to the Apple ecosystem, getting to grips with the OSX operating system could be a shock after a lifetime spent using Windows. Still, at just 1kg the 11-inch version is so lightweight it can be easy to forget you’ve even packed it.