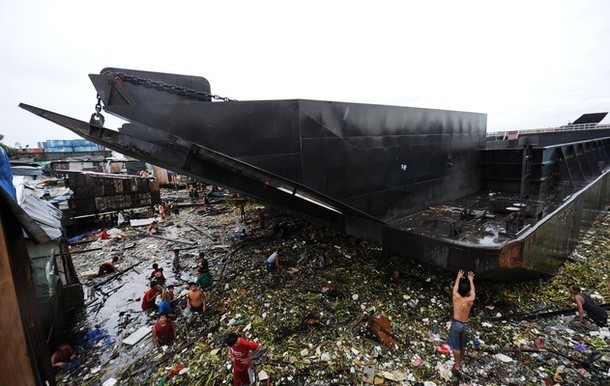 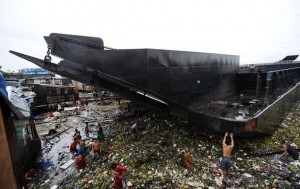 Residents try to salvage materials from their destroyed homes after a barge (top) smashed into an informal settlers area in Manila on July 30, 2012, at the height of strong winds and rains due to Tropical Storm Saola. At least one person was killed and millions were left without power on July 30, as Tropical Storm Saola brought heavy rains to large parts of the Philippines, the government said. (MNS photo)

Manila, July 30, 2012 (AFP) – At least three people were killed and millions were left without power Monday as Tropical Storm Saola turned into a typhoon, bringing heavy rains to large parts of the Philippines, the government said.

Manila was one of the worst hit areas and schools across the sprawling capital were suspended, largely due to flooding, the National Disaster Risk Reduction and Management Council said.

Nearly 13,000 people were evacuated in Manila, other parts of the main island of Luzon and the central Visayas region, as rainfall reached 20 millimeters (0.8 inches) an hour, according to the council.

“The worst appears to be over, though… there will be more rains forecast today,” council chief Benito Ramos told AFP.

One person drowned in the central province of Antique, while the body of a man believed to be a fisherman lost at sea washed ashore in a coastal town south of Manila, he said.

The coast guard meanwhile said one of 57 passengers aboard a ferry that sunk Sunday in rough seas in the central Philippines died of an apparent asthma attack while being rescued.

All the other people aboard were safe, it said.

Saola did not strike the Philippines directly but exacerbated rains from a low pressure area in the vicinity, weather forecasters said.

By late afternoon Monday, Saola was in the Philippine Sea, 260 kilometers (161 miles) off the northernmost Batanes islands and heading slowly towards Taiwan, the weather station said.

The northern regions are still vulnerable to flashfloods and landslides even as the typhoon pulls away, it warned.

Work in all government agencies was suspended in Manila in the afternoon to allow workers to return home early amid forecasts of more rain, presidential spokeswoman Abigail Valte said.

The storm knocked out power for as many as two million households in Manila starting late Saturday, said Joe Zaldarriaga, spokesman for the Manila Electric Co. which distributes power to the capital of 15 million.

Even though repair crews had restored electrical service to most of those affected, there were still 38,000 homes without power as of Monday afternoon, he said in a radio interview.

“We apologize for the inconvenience but be assured that we are doing are best to immediately restore power,” Manila Electric said in statement to customers.

At least 15 domestic flights were also called off, while emergency officials were also monitoring La Mesa dam north of Manila after its water neared overspill level.

La Mesa provides water to Manila’s residents, and any overflow could flood a major river that snakes across the northern portion of the capital before draining into Manila Bay.

“There are thousands of residents living along this waterway and we have told them to prepare for possible evacuations,” Ramos told AFP.

‘On trend’ men dare to be fashionable