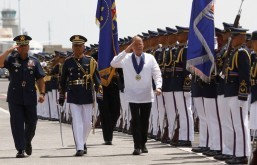 President Benigno S. Aquino III, accompanied by Philippine Air Force (PAF) Commanding General Lt. Gen. Jeffrey Delgado, reviews the troops during the 67th PAF Anniversary at the Haribon Hangar of the Air Force City in Clark Air Base, Pampanga on Tuesday (July 01, 2014). This year’s celebration is anchored on the theme “Soar High PAF for Peace, Freedom and Development”. PAF was founded on July 1, 1947- two years after the end of World War II. It traces its lineage to the Philippine Army Air Corp, which was established in 1941. (Photo by: Rey Baniquet/ Malacañang Photo Bureau)

In a statement on Monday, Syjuco said Aquino should be impeached for “bribery,” “betrayal of public trust,” and “culpable violation of the Constitution.”

This after the Supreme Court ruled that parts of Aquino’s DAP were unconstitutional.

Syjuco said Aquino violated the Constitution by implementing the DAP.

He also said Aquino should be impeached for bribery due to allegations that funds from DAP were given to senators as incentive for convicting ousted Supreme Court Chief Justice Renato Corona.

Syjuco’s impeachment complaint is yet to be endorsed because members of the House are on leave during the session break.

Syjuco said he just submitted the complaint to the House Records Management Service Office “to protect it from intimidation and threats from those who oppose its filing.”

The former Iloilo Representative had filed a libel complaint against Aquino for his tirades against him during his 2013 State of the Nation Address.

Aquino was then referring to Syjuco’s watch of Tesda when the agency was wracked with graft allegations.

Syjuco is facing six graft charges before the Sandiganbayan in connection with the alleged P61-million overpricing in the purchase of Tesda training materials. The Sandiganbayan has issued a hold-departure order against him.

Syjuco has repeatedly denied the charges.

He filed a plunder complaint against Senate President Franklin Drilon over the questionable release of millions in Priority Development Assistance Funds (PDAF) or pork barrel for a project in Iloilo, Drilon’s home province.

He also filed plunder and graft charges against Budget Secretary Florencio Abad and Drilon for the questionable release of PDAF to Abad’s wife 10 times her regular pork barrel allocation for the lone district of Batanes.

Syjuco also accused Abad of allowing the alleged release of the DAP funds to senators who voted to convict Corona.

Oliver Lozano, the former lawyer of late strongman Ferdinand Marcos, also submitted an impeachment rap against Aquino and asked Kabataan party-list to endorse it. But the militant group said it will still verify Lozano’s complaint if it could be incorporated in their own impeachment complaint. (MNS)

Darren Star to bring a new comedy to US television

Kin of Fallen 44 won’t get US reward: official