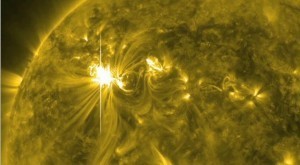 (WASHINGTON-AFP) – The strongest space weather storm in five years struck Earth on Thursday, causing some airlines to reroute their flights, threatening power disruptions and sparking a show of the northern lights.

NASA and other agencies warned that the storm had the potential to disrupt global positioning systems, satellites and power grids, and had already caused some air carriers to change their planes’ polar flight paths.

However, the Earth’s magnetic field appeared to be absorbing the brunt of the shock and it was unlikely to reach the most severe levels, US experts said.

The leading edge of the coronal mass ejection — a burst of hot plasma and charged particles — that erupted from the Sun early Wednesday reached Earth on Thursday at 1045 GMT (5:45 am Eastern time in the United States), said an update from the National Oceanic and Atmospheric Administration (NOAA).

Predictions that the storm would reach a level three on a scale of five, or a “strong” level of solar radiation and geomagnetic storming, continue to “look justified,” NOAA said.

“So far the orientation of the magnetic field has been opposite of what is needed to cause the strongest storming. As the event progresses, that field will continue to change.”

NASA had forecast late Wednesday that the storm could reach “severe” levels, and its effects were expected to last through Friday.

The storm is likely “the strongest one since December 2006,” NOAA scientist Joseph Kunches said on Wednesday.

Astronauts aboard the International Space Station were not expected to be affected by the radiation storm, NASA said.

A vivid display of the northern lights — aurora borealis — created when highly charged particles interact with the Earth’s magnetic field, causing a colorful glow, was expected to be visible over central Asia at nightfall Thursday.

Geomagnetic and radiation storms are growing more frequent as the Sun leaves its solar minimum period and moves into a solar maximum over the coming years, but people are generally protected by Earth’s magnetic field.

However, some experts are concerned that because the world is more reliant on GPS and satellite technology now than it was during the last solar maximum, more disruptions to modern life are likely.

The fuss began late Sunday at an active region on the Sun known as 1429, with a big solar flare that was associated with a coronal mass ejection that thrust toward the Earth at some four million miles per hour (6.4 million kilometers per hour).

A pair of solar flares and a CME followed overnight Tuesday-Wednesday, setting off a strong geomagnetic and solar radiation storm registering at level three on a five-step scale.

NASA said the first of the two flares on March 6-7 — classified in the potent X class and facing directly at the Earth — was the biggest this year and one of the largest of this cycle known as the solar minimum, which began in early 2007.

In fact, it was second only to a stronger one that erupted in August.