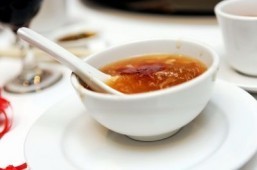 Beginning this July, in a gesture of environmental stewardship, the company will no longer serve the dish that’s considered a delicacy and symbol of wealth in China, the company said in a release.

The ban will also extend to other threatened animal species such as whale and sea turtle which will also be stricken from the menus of their 1,200 hotels and 1,300 restaurants around the world.

“This is tremendously good news and a beacon of corporate leadership in ocean health,” said Peter Seligmann, CEO, Conservation International.

“As apex predators, sharks serve a critical role in maintaining healthy ocean ecosystems, which directly support our fisheries, economies, culture and health. Their value to human well-being is so much greater than the misguided worth of their severed fins.”

Conservation International has been a global Starwood partner since 2009.

In 2012, the Shangri-La also announced plans to stop serving shark fin across its list of properties worldwide.

The Hong Kong-based group said it would cease serving shark fin in all of its restaurants and phase out Bluefin tuna and Chilean sea bass, which are under the threat of extinction, at all restaurants as part of their sustainable seafood policy.

It’s estimated that 100 million sharks are killed every year in illegal hunting and poaching. Shark fin soup is considered a luxury dish in Asia and is often served at weddings.

The soup is made after sawing off the fins of live sharks and throwing the bodies back into the ocean, where it can take days for the animal to die. Some sharks will starve to death, some will drown, and others will be eaten by other predators.

Some shark species have suffered population declines as high as 99 percent in recent decades due to the rising consumption of shark fin soup.

The move out of Starwood follows on the heels of a landmark gesture last year, in which China banned shark fin soup as well as bird’s nest soup — another controversial Chinese delicacy — from official government banquets and receptions.

Obama back home after surprise visit to Afghanistan