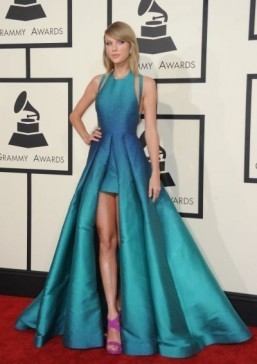 (Los Angeles-AFP) – The mega-stars of the music world rocked daring outfits in classic black and white on the Grammys red carpet Sunday, strutting their stuff in Los Angeles on the industry’s biggest night.

Queen Bey wasn’t the only star to show some major cleavage.

Madonna channelled her inner naughty toreador in a skimpy black-and-pink Givenchy mini-dress, her breasts pushed up to a dangerous level. Thigh-high black boots and elbow-length gloves completed the look.

Rapper Nicki Minaj left nothing to the imagination in a black Tom Ford gown that was cut down to her bellybutton in a wide V and hugged her hips.

Meghan Trainor, a nominee for record and song of the year for her sugary pop hit “All About That Bass,” strutted her stuff in a gauzy black Galia Lahav dress with a long lace overlay.

Her red carpet accessory? Her father.

Trainor said being at the Grammys was a “dream come true.”

Two of the three sisters who make up the pop-rock group Haim — nominated for the coveted best new artist prize — turned up in basic black, but Danielle Haim strode down the carpet in a white pantsuit.

Nominee Taylor Swift set herself apart in a blue-green Elie Saab gown with a high-low hemline.

Australian rapper Azalea also added a pop of color to the proceedings, in a royal blue figure-hugging Armani gown, with her blonde hair braided in a crown around her head.

Rihanna was pretty in pink — well, not everyone on social media thought so.

The Barbados native floated up the red carpet in a billowing cloud of pink tulle — Giambattista Valli tulle. Twitter blew up with comments — pro and con.

“Rihanna on the red carpet suddenly made me hungry for a cupcake. Is there a baby under there? Or a gaggle of birds? I’m confused,” said one user, @mikaelav35.

The fierce tuxedo she wore on stage to perform with Kanye West and Paul McCartney — accessorized with a diamond choker — was a much safer sartorial choice.

The Grammys have been the scene of some of fashion’s classic red-carpet moments: Jennifer Lopez’s plunging barely there green Versace gown in 2000 is still a fierce benchmark.

The men of music attending the ceremony at the Staples Center did not disappoint.

He later changed several times as he went up on stage to accept four awards — Record of the Year, Song of the Year, Best New Artist and Best Pop Vocal Album.

Pharrell Williams, with three awards on the night, busted out a pale gray Bermuda shorts suit from Adidas — but not the towering Vivienne Westwood Smokey the Bear hat that was the talk of last year’s show.

John Legend opted for a gray Dolce & Gabbana suit with no tie.

His wife, model Chrissy Teigen, was sultry in a white Gucci gown with strategic cut-outs snaking around the curves he sings about in his hit love song “All of Me” — nominated for Best Pop Solo Performance.