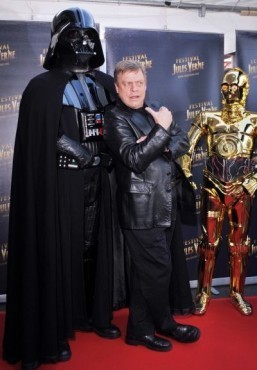 Should Luke Skywalker have turned to the Dark Side? Actor Mark Hamill poses with Dark Vader
©AFP PHOTO / MIGUEL MEDINA

Hosting the penultimate episode of chat show “Dinner for Five” was Kevin Smith, director of “Clerks” and partial “Star Wars” homage “Jay and Silent Bob Strike Back”; among his guests were director J.J. Abrams, who had “Mission: Impossible III” in production, and Mark Hamill, observed Vulture.

Now fans are asking whether Hamill planted a seed in Abrams’ mind that day, years before the up-and-coming creative was brought on board to craft “Star Wars”‘ future.

He’d wanted Luke Skywalker to turn evil in the franchise’s third film — “full bore Dark Side,” as Smith put it — and pitched the idea to “Star Wars” creator George Lucas.

“As an actor, that would be more fun to play,” he explained. “When we finished [Episode II], I figured that’s what will be the pivotal moment.”

“I’ll have Han Solo in my crosshairs, and I’ll be about to kill him, or the Princess, or somebody that we care about.”

Instead, that story arc formed the basis for Lucas’s less well-received prequel trilogy, which had recently concluded at the time of the “Dinner for Five” episode, charting the transition of Anakin Skywalker from Jedi apprentice to Luke’s father and nemesis, Darth Vader.

Hamill is known to be involved in the film, but his character has been conspicuously absent from promotional art and on-set photography.

A cloaked individual with robotic arm can be glimpsed in the trailer, and many have been comfortable assuming that character is Luke.

But thanks to clever editing, and like so many other details of the film, no one really knows for sure.

So, they say, perhaps Abrams took Hamill’s idea and worked it into his new treatment. Perhaps Luke really has gone to the Dark Side.

Or perhaps it was the possibility that intrigued Abrams more than the act itself, sparking off new story ideas, and driving the wonderfully ambiguous teasers we have now.

After all, Luke believed there was still good in Darth Vader. Perhaps there still is.