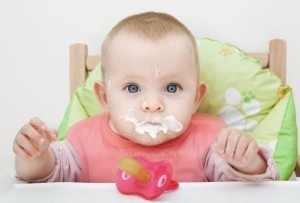 Researchers found that "baby-led weaning" led to a child expressing a clear preference for pasta, rice and other carbohydrates over sweets ©Patrick Breig/shutterstock.om

(PARIS-AFP) – Infants outgrowing a liquid diet who give themselves finger food rather than being spoon-fed puree are likelier to eat healthily and avoid getting fat during weaning, reports a study released Tuesday.

Researchers found that the technique, known as “baby-led weaning,” led to a child expressing a clear preference for pasta, rice and other carbohydrates over sweets, thus helping to cement a foundation for eating the right foods.

Experts and parents alike have long debated over when and how to help an infant make the transition from mother’s milk or the bottle to a solid-food regimen.

Many studies have already concluded that self-feeding with finger food is fine for most infants.

But what impact this approach might have on longer-term taste preferences and a child’s overall health has until now been less clear.

Ellen Townsend and Nicola Pitchford of the University of Nottingham designed a study that looked at the eating habits of 155 children during weaning, a period that ranged from 20 months to six and a half years old.

Sixty percent of the kids had been allowed to feed themselves finger foods such as strips of toast and pieces of fruit, while the remaining 40 percent had been spoon-fed pureed foods throughout the weaning process.

The research, published in the British Medical Journal (NMJ), was based on a questionnaire answered by parents in the region.

Despite the fact that infants in the spoon-fed group were offered more carbohydrates, fruits, vegetables and proteins, they wound up liking sweets more than the self-fed children.

The kids allowed to eat finger food, moreover, were more likely to be in their correct weight bracket and less likely to be obese at the end of weaning, a process which for some children can take months, but for others years.

Being overweight in infancy is an early risk factor for obesity in later life.

“Our results suggest that baby-led weaning promotes healthy food preferences in early childhood that could protect against obesity,” the study concludes.

“This has implications for combating the well-documented rise of obesity in contemporary societies.”

Finger food works because it accustomises children to the textures of what they will be eating later, the researchers speculated.

The researchers noted, however, that there were a few more underweight babies in the baby-led group, and suggested that further studies with a larger cohort were needed to confirm the results.

How Americans will be spending their summer holidays this year

Bonta commemorates the 50th anniversary of the Delano Grape Strike