It’s only the second week of January 2015 and already, Karen Crespo’s black book is already filled with appointments and engagements; and it’s not a surprise since her 2014 calendar was also pretty busy.

“If you told me a few years ago that I would find myself in this position, I would have laughed at you and thought you were crazy,” said the meningitis survivor and quadruple amputee. 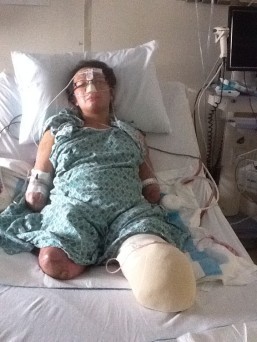 In her former life, which were the years from her birth until one day in December of 2011, she was a pretty, petite nurse having the time of her live – loving her job serving others, while spending her free time with friends; meeting and dating  men, like what normal single ladies do; traveling to exotic places for vacation; and throwing herself in popular interests like fashion.

All that changed three years ago, when she found herself battling meningococcal meningitis, a rare but very serious illness.

“I felt very tired. I had uncontrollable diarrhea. My feet were cold; and when I bent down to put on socks, I couldn’t move my neck. It was so stiff. And, as a nurse, the first thing that came to mind was meningitis,” she said during an interview in 2013. “I was very sure. They emphasized it so much in nursing school, stiff neck and meningitis. Not too many people know about it. But it’s very serious.”

In 2012, the Centers for Disease Control and Prevention reported that anywhere from five to 20 percent of the population may carry the bacteria that cause meningococcal meningitis. In most cases, however, it is dormant and does not cause the disease. One can be a carrier and not show any symptoms. But the bacteria may be passed on through saliva – kissing; sharing food, drinks, utensils. When caught by someone with a weak or compromised immune system, it can turn deadly. 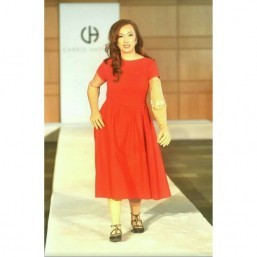 For fifteen days, Karen was in a medically-induced coma. And when she woke up on Christmas Eve that year, she said all she could move was her head.

“It was a blessing because they didn’t even think I could make it,” Karen said, but admitted that the first few days after she woke up, she was questioning if it was indeed a blessing for her to be alive. The hospital’s intensive care unit was her home for five months. Aside from suffering two heart attacks, gangrene also took over all of Karen’s two arms and two legs, causing them to be amputated. She also lost her nose and a part of her ear. “I had a hard time dealing with my body image. I was so embarrassed.”

Thankfully, as time heals all wounds, Karen’s perception, along with her predicament, changed for the better.

In 2013, Karen completed physical rehabilitation and psychological counseling, to help her deal with her new life.  And in a more recent interview in 2014, an even more beautiful Karen faced us, to talk about being the highlight of New York Fashion Week (September 2014) with the help of designer Carrie Hamer. 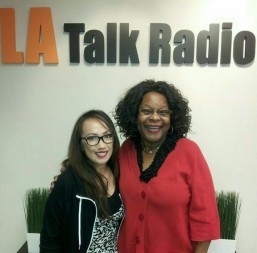 “Walking during New York Fashion Week was definitely the turning point for me. Before that I felt like I was lost and I didn’t know what my purpose was. Now I know that my purpose is to be a role model and inspire others. Because of that one event I felt like anything is possible,” she said.

In October 2014, she participated in the National Meningitis Association Conference in Atlanta where she talked about her story and helped inform communities about the disease, the vaccine and preventive measures.

“Of course this organization is near and dear to my heart because of the way bacterial meningitis affected me,” she said.

In November 2014, Karen did a photo shoot for the “Fabulous Filipinas” calendar, featuring Filipino American personalities with inspiring stories to tell.

“It was a pleasure shooting a calendar for Fil-Ams honoring our achievements in the community,” Karen said about this project of The Filipino American Press Club of California. “It’s so nice to represent those living with physical disability. It also gave me the opportunity to continue to inspire others, especially people living with some kind of disability. 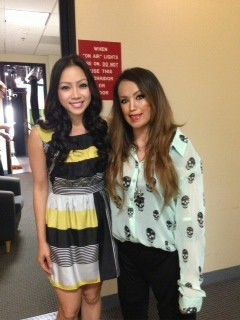 Jannelle So and Karen Crespo

In the first week of 2015, Karen was a guest on The Mother Love radio show on LA Talk Radio. “We talked about New York, my stolen arm prosthetics in 2013, and my future endeavors.”

Karen’s future endeavors include jetting off to Berlin, Germany this coming spring, to do a photo shoot for a talent agency out there.

This budding model is also a budding reality TV show star as she currently works with a Hollywood producer to do an 8-episode documentary series about her life as she embarks on a mission to renovate her house, to make it more accessible for her. For this, she is helping to host a fundraiser in April, at a local CrossFit gym in the city of Covina.

Despite these engagements, there’s no slowing down for Karen: “I am working on public speaking so I can be a motivational speaker in the future or even write a book about my life. I would really like to speak to different communities about my experience becoming an amputee and a meningitis survivor. Hopefully it will inspire others to never give up and live life to its fullest,” she said in parting.

And what better time to be reminded about “living life to the fullest” than the start of the new year, with all its hopes and promises. [END]

For more information about Karen’s journey, check out www.CaringForKaren.com. She is also raising money through this website, so she can be independent again, to make her home more accessible, and hand controls for a car so she can start driving again.

Jannelle So is taking a break from 20-years of print and broadcast journalism career that began in the Philippines and continued in the United States. She is credited for creating, hosting and producing America’s first and only locally-produced daily talk show for Filipinos, that ran for 8 ½ years under her leadership, making it the longest-running Filipino talk show outside of the Philippines. Connect to her on Facebook, Twitter and Instagram; or email her at sojannelle77@gmail.com.

America archives its billions of tweets