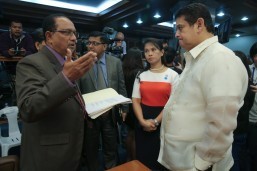 MANILA  (Mabuhay) – The Senate may hold two or three more hearings at it struggles to determine how $81 million in stolen funds seeped into Philippine financial system.

Senate Committee on Banks chairman Serge Osmeña admitted Friday that some parties tagged in the scandal have invoked the bank secrecy law, thus barring lawmakers from seeking full details into how funds from the Bangladesh Bank were moved to local banks and casinos.

Osmeña pointed out that exceptions from the Bank Secrecy Act are very strict and may only be sought in cases of impeachment or graft and corruption.

The senator said they are leaving the state prosecutor in charge of filing criminal raps in connection to the heist, which is one of world’s biggest cybercrimes.

He also reiterated that junket operator Kim Wong may still face charges for his alleged involvement in the scandal despite returning part of the stolen funds.

The Senate blue ribbon subcommittee will hold its fourth hearing on the scandal on April 5, Tuesday. (MNS)