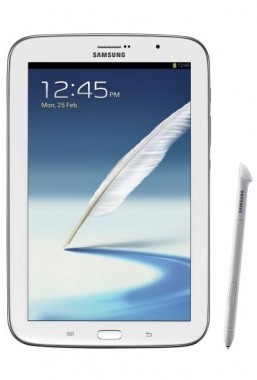 (Relaxnews) – The company’s latest 8-inch tablet, conceived as a direct competitor to the iPad Mini will go on sale in the US on April 11.

The tablet, which doesn’t feature a high-resolution screen, but does boast S-Pen stylus support, a 1.6GHz Quad Core processor and 2GB of RAM plus 16GB of internal storage (which can be expanded to 80GB via a 64GB micro SD card) is being marketed by Samsung as the ideal device for both work and play.

The company claims it offers best-in-class multimedia performance in its size segment and that, thanks to its built-in IR blaster, serves as a universal remote control. Upon its US launch it will also be the first Samsung product to feature WatchON, a search and recommendation service aimed at users looking for the second screen experience. It is supposed to make finding content — whether traditional programming, web clips or on-demand shows — simple and clear, therefore eliminating the need to constantly channel surf.

On top of the standard $399.99 device, the first US buyers will also receive 50GB of free dropbox storage (valid for two years), a month of free Samsung Music Hub music streaming plus, for a limited time only, a $25 Google Play credit that they can use to buy Android apps. Samsung is offering a similar bundled deal in the UK where it is also scheduled to launch this week. However, British buyers will have to part with £339 ($500) for the same product as their US counterparts.

The Galaxy Tab 8 will launch online and in store on April 11 and can be purchased everywhere from Amazon to Best Buy.

Ferrari to celebrate 60 years in the US with special edition

Texas, Southern plains on alert for another round of flooding rainfall