Resorts World Manila announces the opening of ‘The King and I’ at the Newport Performing Arts Theater, starting from September 15, 2012. 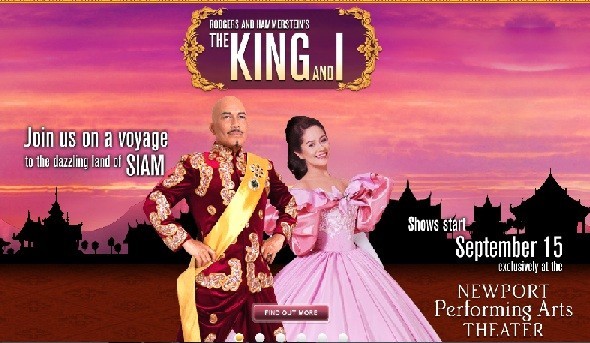 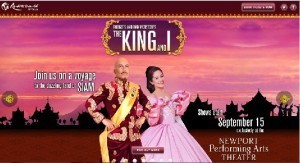 The King and I

Pasay City, Philippines, September 2012 – Fresh from the alps of Vienna, Resorts World Manila now cordially invites everyone to embark on an enchanting voyage to the land of Siam asThe King and I opened on September 15, 2012 at the Newport Performing Arts Theater.
A staunch supporter of performing arts, Resorts World Manila has previously brought two major productions onstage: the magical world of Kaos and The Sound of Music.

The fifth masterpiece of the celebrated tandem of Rodgers and Hammerstein, The King and I is the story of a widowed English school teacher who travels to Siam to serve as tutor to the many children of the King. Anna’s task of introducing the kingdom to the modern world brings about disputes with the King whom he learned to respect and love over time.

Considered as one of the most beloved classics in theater, The King and I has reaped critical acclaim across the globe, including 5 Tony Awards for its original 1951 Broadway run, and 5 Academy Awards for its iconic 1966 film adaptation starring Yul Brynner and Deborah Kerr. It is a story as beautifully intricate and multi-faceted as the culture it portrays, brought to life with timeless songs and melodies.

Reprising the roles of The King of Siam and schoolteacher Anna Leonowens are West End veterans Leo Tavarro Valdez and Monique Wilson, with solid support from celebrated thespians Gina Respall (Lady Thiang), Tanya Manalang (Tuptim) and Lorenz Martinez (Lun Tha). Bo Cerrudo, Shiela Valderrama, Apple Chiu, Marian Santiago and Floy Tena complete the stellar cast. Live music will be performed by the Manila Philharmonic Orchestra, with dance sequences by the Philippine Ballet Theater. At the helm of The King and I is premier concert and theater director Direk Freddie Santos.

For more information on the production, show schedules and ticket prices, log on to The King and I microsite atwww.rwmanila.com/the-king-and-i.

Resorts World Manila (RWM) is the first integrated tourism destination in the Philippines. Conveniently located across Ninoy Aquino International Airport 3, RWM is an instant gateway to Philippine hospitality. This lifestyle hub is home to three international lodging brands: Maxims Hotel, the first all-luxury suite hotel in the country; Marriott Hotel Manila, a five-star brand known all over the world; and Remington Hotel, for the value-conscious traveler.

RWM’s Newport Mall features luxury retail brands from all over the world. It offers a unique viewing experience at The Newport Cinemas with its stadium seating and state-of-the-art cinema technology, and plays and performances at The Newport Performing Arts Theater, the metro’s newest venue for the hottest concerts and events.

RWM is also home to the biggest gaming facility in the Philippines. RWM offers free membership that gives guests access to rewards, discounts, freebies, and exclusive invites to RWM events.