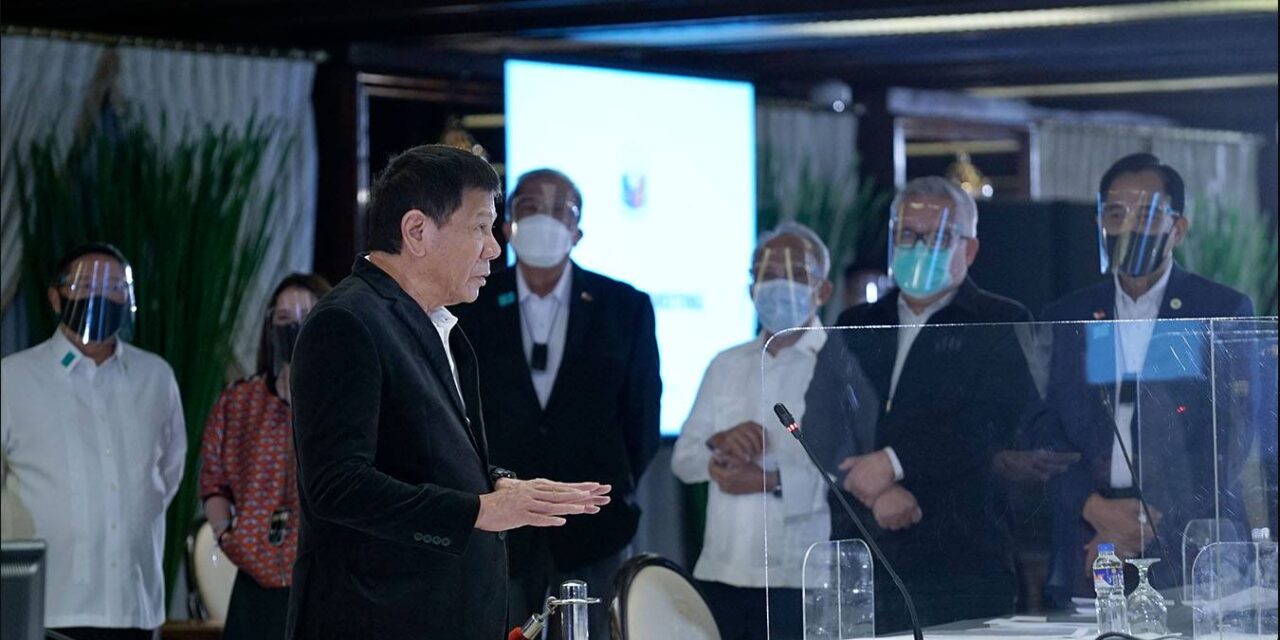 Presidential Spokesperson Harry Roque said the President’s preference not to shift to MGCQ unless there is a vaccine rollout was raised during the ongoing Cabinet meeting.

“President Rodrigo Roa Duterte gave his directive to the Cabinet that the Philippines would not be placed under modified general community quarantine unless there is a rollout of vaccines,” he said in a statement.

While Duterte acknowledged the need to reopen the economy, Roque said the President refused to put people’s health and safety at risk.

“The Chief Executive recognizes the importance of reopening the economy and its impact on people’s livelihoods. However, the President gives higher premium to public health and safety,” he added.

Roque said Duterte also emphasized his desire for vaccination to start the soonest possible time to ease the community quarantine.

In a separate message, Senator Christopher “Bong” Go said Duterte thinks that further easing the nationwide quarantine classification is “not to the best interest of the country.”

Citing the President, Go said Duterte’s “conscience” would not allow a transition to MGCQ because he is concerned that “something might go wrong.”

Go said Duterte expressed confidence that his economic managers will understand his decision.

He noted that Duterte also reiterated his preference not to allow the dry run of face-to-face classes until the immunization program starts.

The national government is expected to kick off its vaccination drive this month with the arrival of initial doses of Covid-19 vaccines.

Earlier, Presidential Spokesperson Harry Roque said Duterte will decide on the next quarantine classification based on current Covid-19 data analytics.

He said Duterte has thumbed down the proposal to hold pilot in-person classes next month, but is open to the conduct the dry run by August.

“I guess what he is anticipating is since we will begin vaccination this month, we will be way ahead of our vaccination in August to give us the confidence to resume at least limited face-to-face education,” he said.

The Inter-Agency Task Force for the Management of Emerging Infectious Diseases (IATF-EID) and the National Economic and Development Authority (NEDA) have recommended that the government push through with a nationwide MGCQ and with pilot in-person classes next month.

Q&A: How Internet.org aims to connect the world’s poor