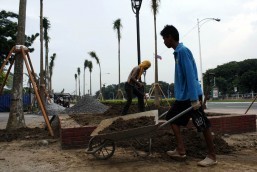 PARIS, September 9, 2013 (AFP) – Growth is picking up pace in most major rich nations but momentum is slowing or stable in emerging economies, the OECD said on Monday.

Economic growth is accelerating in the United States, Britain and the eurozone, while it is above trend in Japan, according to the OECD’s index of composite leading indicators.

The index is considered to be a reliable guide to future economic activity.

The index suggested Italy and France are switching to growth.

But the OECD, grouping 34 advanced countries, said growth was below trend in Brazil and India. Meanwhile it was returning to trend in China and was around trend level in Russia.

In a separate report, the OECD said the Philippines was the only emerging Asian nation with strong business cycle momentum, although China and Singapore have stabilized.

The OECD said “the key imminent downside risk facing Southeast Asia, China and India is the turmoil in the financial market, triggered by the prospects of tapering of quantitative easing (QE) policy in the US.”

The US stimulus program led to a flood of funds into emerging markets seeking higher returns, but the impending shift in monetary policy has seen a sharp withdrawal, causing currencies and equities in some emerging markets to slump.

Where gourmands can dine for New Year’s Eve