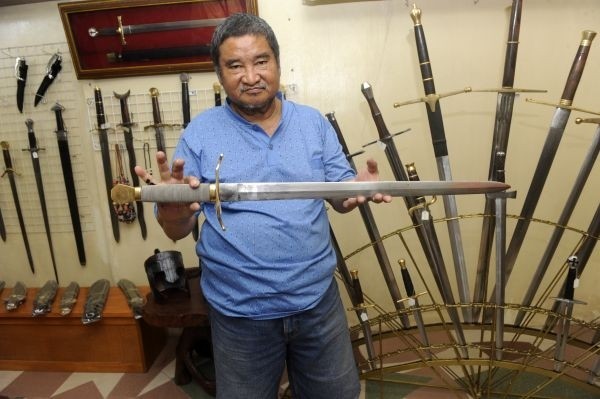 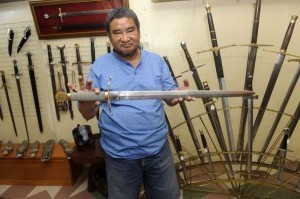 Philippine blacksmith Filomeno de Guzman wields a replica of the Agincourt sword, an English single-hand weapon at his shop in the northern town of Pozorrubio. ©AFP PHOTO / JAY DIRECTO

(POZORRUBIO, Philippines-AFP) – Filomeno de Guzman does not know Sparta from medieval Scotland, but the Philippine swordsmith is an expert at replicating ancient warriors’ tools for killing each other.

The business feeds an overseas market for replica swords of Roman gladiators, Greek infantry and Japanese samurais, as well as movie-inspired weapons from “Braveheart”, “Conan the Barbarian”, and “Rambo”.

“Swords are enjoying a renaissance in Hollywood. That means the storied weapon remains popular, and that works in our favour,” de Guzman, 63, told AFP during a visit to his workshop in a farming area of the northern Philippines.

De Guzman never went to university and confesses he does not know much about ancient history, although he does enjoy learning from movies.

“Hollywood, yes, I love Hollywood movies. I watched ‘Braveheart’, ‘Gladiator’, ‘Lord of the Rings’, ‘Conan the Barbarian’, ‘Rambo’, and ‘Samurai’, all on DVD,” he said.

De Guzman’s unlikely export business had its origins in him deciding to quit the Philippine security forces in 1980 and taking free government lessons in metalworks.

He began producing kitchen knives using a wood-fired forge in his backyard, set amid vast rice fields in the farming town of Pozorrubio, 180 kilometres (110 miles) north of Manila.

“It’s a good, non-perishable product. All households need blacksmiths and their knives,” de Guzman explained of his career choice.

However US soldiers deployed at two nearby US military bases soon noticed his craftsmanship and they also began commissioning him to make knives.

Later on the soldiers started ordering swords and, as the demand for more elaborate designs grew, he started delving into books on ancient weaponry.

When a friend took some of his swords to an exhibition in the United States in the 1990s, de Guzman was connected with an American distributor and his international business was cemented.

A few other Philippine smithies also craft swords for export, though de Guzman believes he is the biggest exporter.

The majority of his work now caters for the overseas market, although he still makes some knives and machetes for local housewives and farmers.

De Guzman describes his overseas clientele as medieval warfare and history buffs with a lot of disposable income.

“I was told these are people who dress up with Renaissance costumes and bring swords to annual festivals,” he said.

More than 100 models hang on pegs on his office wall, including copies of short Roman empire infantry swords and a massive broadsword like those used by Spartans against Persians in the Battle of Thermopylae in 480 B.C.

De Guzman said he had sold more than 1,000 Excalibur swords from the Arthurian legend.

He has also exported a similar number of the Sir William Wallace sword, popularised by the 1995 Mel Gibson “Braveheart” film of the 13th-century Scot who fought English rule.

The two-handed sword, with a 73-centimetre (28-inch) long blade, weighs five kilogrammes (11 pounds) and sells for $600 abroad, according to de Guzman.

While declining to talk in detail about how much money he had made exporting the weapons, de Guzman said his profession had allowed him to send his four children to university.

His home is also clearly middle class, no small achievement in the Philippines where roughly one quarter of the country’s 100 million people live on a dollar a day or less.

De Guzman has also provided extra employment for his rice farming neighbours, who gather in his backyard in their basketball shorts and sandals to work the forge and mould metal when orders come in.

“Like me, they are also unschooled. If there are orders we all work together, but since they are farmers, the crops get first priority and the shop orders just have to wait. My distributor understands,” he said.

However lawyers in Hollywood have occasionally been less understanding of his profession.

“I named one of my knives ‘Rambo III’,” de Guzman said of a 46-centimetre Bowie blade. “I got a letter from the Rambo producers, telling me, ‘Don’t use our name Rambo or we will sue you.'”

Nevertheless, after renaming it ‘The Stallone’, after the movie’s star, there had been no more threatening letters.

De Guzman also insists his popular “Braveheart” Wallace sword was not a movie rip-off, but made from specifications his distributor gave him of the original, which is stored at a museum in Scotland.

After his distributor recently broke into Germany’s sword market, de Guzman is looking to explore more deeply the blood-soaked history of medieval Europe.

“I am already developing a prototype Teutonic great sword,” he said, referring to two-handed blades used by Germanic knights in the 11th-13th Century Crusades in Muslim lands.

Apple’s seasonal goodwill coming to the US this year