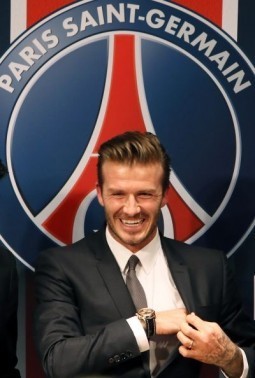 (Relaxnews) – The British tourism office is hoping to capitalize on David Beckham’s arrival in Paris as the newest – and most glamorous addition – to their home soccer team, pitching the sports and fashion icon as a travel ambassador for  the French.

Nearly as soon as it was announced that Beckham would join Paris Saint-Germain last week, the UK tourism office kicked into high gear, releasing details of ‘Beckham’s Britain,’ an itinerary that includes his favorite pie and mash shop in Essex, his favorite things to do as a family and his favorite places to shop.

The itinerary is available on a “Best of Britain” app in partnership with Samsung Electronics and was recently upgraded from a previous version released last year for the 2012 London Olympics.

Beckham has been signed to play with the Parisian team for five months following his stint with the Los Angeles Galaxy.

Here’s a recap of Beckham’s recommendations and favorite haunts across Britain:

1.     Buckingham Palace
2.     Tony Lane’s Pie & Mash shop in Waltham Abbey in Essex
3.     A visit to Old Trafford stadium and Wembley
4.     A stroll through one of the Royal Parks, like Hyde Park, Regent’s Park or Richmond Park
5.     A round of golf at St. Andrew’s in Scotland
6.     Shopping in Manchester’s Northern Quarter, or doing the markets in Camden, Portobello or Spitalfields in London
7.     For the kids, a Harry Potter Studio Tour or Thorpe Park, an amusement park in Surrey
8.     Take in a show like “War Horse” or “Jersey Boys” in London’s theater district.
9.     A fancy dinner at one of Beckham’s favorite London dining destinations such as Cecconi’s, NOPI, Ivy, Nobu or his BFF Gordon Ramsay’s restaurant Bread Street Kitchen
10.  A pint at an authentic British country pub

Escudero: Aquino should have focused on fair polls instead of campaign

One justice makes big difference in US gay marriage ruling