Over 1,800 Pinoys repatriated as civil war rages in Syria 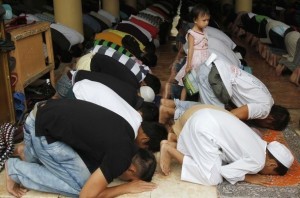 MANILA, July 19 (Mabuhay) – Malacañang on Thursday said over 1,800 Filipinos have been repatriated from war-torn Syria since early last year.

“We have been able to repatriate 1,806 OFWs from Syria,” deputy presidential spokesperson Abigail Valte said.

She said the count began from March 2011.

The Palace official released the figures after the group Migrante International criticized the government for its supposedly slow action on the situation of Filipinos in Syria.

“The DFA is doing the best it can under the circumstances.  Migrante knows that the laws of Syria require us to secure the consent of employers before our OFWs can leave if they are under contract,” said Valte.

She had also earlier said that they have repeatedly been asking the Filipinos in Syria to leave the foreign country.

The uprising in Syria began on March 15, 2011 when 40 people joined a protest against the ruling Ba’ath Party in Old Damascus.

Since then, Syrian forces have killed people involved in demonstrations against the party and President Bashar al-Assad. Rebels and army defectors have likewise attacked state forces.

Last month, a United Nations official said that Syria’s 16-month uprising can now be characterized as a full-scale civil war.

US drops plan to allow pocket knives on flights