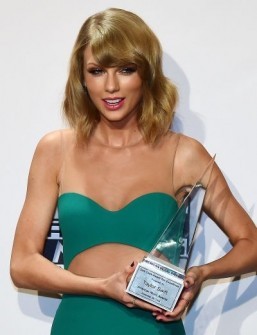 The American Music Awards focus on commercial success with fans voting for their favorites, in contrast to the older Grammy Awards in which music industry professionals select what they consider to be the year’s top work.

One Direction, the heartthrobs who have released albums every year since 2011, won the biggest prizes including Artist of the Year and Favorite Album with their latest work, “Midnight Memories.”

The British quintet flew into Los Angeles for the gala ceremony at the Nokia Theatre, where the young men thanked screaming fans for One Direction’s success in the United States.

Accepting the award from Motown legend Diana Ross, Swift appeared to dish out a new round of criticism, albeit obliquely, against the streaming service Spotify from which she has pulled her music.

Swift’s latest album, “1989,” enjoyed the highest sales of any US album in its first week in 12 years. It far outpaced industry expectations by selling two million copies in the United States in its first three weeks.

After the album came out, Swift pulled her entire catalog from Spotify, accusing the fast-growing streaming service of devaluing music by not paying enough back to artists.

Spotify’s Swedish founder Daniel Ek hit back that the company has paid $2 billion to artists and songwriters since its 2008 launch, creating a rare source of new revenue in the beleaguered industry.

Swift opened the evening by performing the album’s latest single “Blank Space,” in which the 24-year-old singer — playing at her reputation for short-lived relationships — held a burning rose as she pushed back suitors who pranced around her holding open picture frames.

They performed “Start a Fire” — with ABC television editing out some lyrics from the broadcast. The track is expected to be on Lil Wayne’s upcoming album “Tha Carter V,” which is scheduled for release on December 9 after repeated delays.

JANE DE LEON CUTS HAIR SHORT FOR ROLE, BUT IS IT FOR ‘DARNA’?

BEA ALONZO HAPPY TO BE PART OF GMA NETWORK