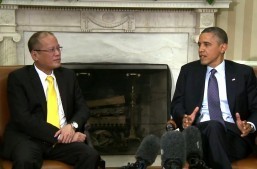 President Obama and President Benigno Aquino of the Philippines at the White House on June 8, 2012 speak to the press after a bilateral meeting in the Oval Office. The White House announced that Obama will visit the Philippines and other Asian countries, including a historic stop to Malaysia, in April this year after cancelling last year’s scheduled visit because of the U.S. government shutdown. (Manila U.S. Embassy photo release)

WASHINGTON, D.C. – United States President Obama today signed into law a legislative measure that would allow American taxpayers to claim deductions for donations they made to support relief and rehabilitation efforts in the Philippines in the aftermath of Typhoon Haiyan.

The enactment of the Philippine Charitable Giving Assistance Act, which would also allow US taxpayers to continue making tax-deductible donations to typhoon victims in the Philippines until 15 April, was immediately welcomed by the Philippine Embassy.

“The immediate signing by President Obama of the Philippine Charitable Giving Assistance Act underscores the importance the US Government places on the immediate recovery of typhoon-devastated areas in the Philippines,” Ambassador Jose L. Cuisia, Jr. said.

The Ambassador thanked President Obama for his prompt action on the measure and lawmakers led by Hawaii Sen. Mazie Hirono and California Rep. Eric Swalwell and their cosponsors for introducing the measure and ensuring its passage in Congress.

“I wish to reiterate the profound gratitude of the Philippine Government and the Filipino people for the generous outpouring of support and solidarity by the US Government and the American people to the victims of Typhoon Haiyan,” Ambassador Cuisia said.

The Embassy said the new law was introduced in the House of Representatives by Congressman Swalwell and was co-sponsored by 35 congressmen – 26 Democrats and nine Republicans. It was unanimously passed as House Resolution 3771 on Monday.

On the other hand, Senate Resolution 1821, sponsored by Senator Hirono, and supported by Majority Leader Harry Reid and Foreign Relations Committee Chair Robert Menendez, among others, was passed on 6 March.

The Embassy, quoting the Office of Senator Hirono, said the new law would allow taxpayers who donate to the relief efforts in the Philippines after the President’s signature on 25 March and before 15 April 2014 to take the charitable deduction when they file their 2013 tax returns.

Taxpayers who donate in this timeframe but have already filed their taxes can amend their tax returns to receive these benefits this year.

Without this law, taxpayers can claim a tax deduction for contributions they make to charities, but they receive the tax incentive many months later after they file their tax returns the following year. The law eliminates this delay.

Meanwhile, the National Federation of Filipino American Associations (NaFFAA) has commended the U.S. Congress for passing a bill allowing American taxpayers to deduct from their 2013 taxes any charitable donations to the relief of Typhoon Haiyan victims in the Philippines.

In a news released, NaFFAA also thanked President Obama for promptly signing the bill into law.

“In addition to what the U.S. has already provided, in terms of massive relief and assistance, this latest action is a welcome opportunity for U.S. taxpayers to express their generosity and humanitarian concern for the millions of people whose lives have been adversely disrupted,” said NaFFAA National Chairman Ed Navarra. “We appreciate what this means to the Filipino people who need our support during their difficult period of recovery.”

Louis Vuitton opens up in Courchevel for the ski season

DOH: No new strain of virus causing COVID-19 in Philippines yet