Obama says Sony hack was not ‘an act of war’ 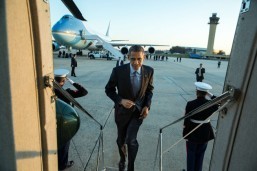 Obama promised an unspecified “proportionate” response, and said he would “review” whether to return North Korea to the US list of state sponsors of terrorism, after a six-year absence.

Republican critics have accused North Korea of waging “cyber warfare” by targeting Sony, urging the president to respond robustly to the crisis.

Speaking in a pre-taped interview on CNN’s “State of the Union,” Obama emphasized that any change to North Korea’s status on the terror list could only happen after a careful evaluation of the facts.

“We’ve got very clear criteria as to what it means for a state to sponsor terrorism. And we don’t make those judgments just based on the news of the day,” Obama said.

“We look systematically at what’s been done and based on those facts, we’ll make those determinations in the future.”

“It’s more than vandalism, it’s a new form of warfare that we’re involved in and we need to react and react vigorously, including reimposing sanctions,” said Senator John McCain, the incoming chairman of the Senate Armed Services Committee.

Washington accuses Pyongyang of being behind the hack that led to the release of embarrassing company emails and caused Sony executives to halt the debut of the madcap comedy action film “The Interview.”

The film about a fictional CIA plot to kill the country’s leader infuriated North Korea, although Pyongyang has repeatedly denied it was behind the cyber-assault on Sony.

North Korea has called for a joint probe into the investigation with the United States into the hacking – an offer swiftly rebuffed by security officials in Washington.

The hermit state threatened to hit back at the White House and other US targets if it was sanctioned over the alleged hacking.

The North’s National Defense Commission, in a statement on the official news agency, said its army and people “are fully ready to stand in confrontation with the US in all war spaces including cyber warfare space to blow up those citadels.”

“Our toughest counteraction will be boldly taken against the White House, the Pentagon and the whole US mainland, the cesspool of terrorism, by far surpassing the ‘symmetric counteraction’ declared by Obama,” it said.

The North, which has in the past made statements threatening the US mainland, accused the Obama administration of being “deeply involved” in the making of the “The Interview” at the center of the Sony hacking.

It again praised the “righteous action” by the hacking group, which has styled itself Guardians of Peace, but said it was unaware where they were based.

The FBI has cited “significant overlap” between the attack and other “malicious cyber-activity” with direct links to Pyongyang, including an attack on South Korean banks blamed on the North.

The North said it has never attempted or made a cyberattack on South Korea.

“It is common sense that the method of cyber warfare is almost similar worldwide,” it added.

DOH TO STUDY COVID-19 VACCINATION OF CHILDREN BELOW 12, SAYS EXEC

Customs seizes P70M worth of rhino horns in Manila