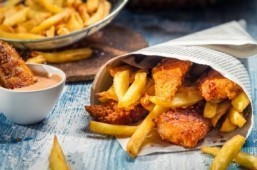 New York on Wednesday became the first city in the United States to demand that chain restaurants put salt warnings on their menu.
©Shaiith/shutterstock.com

(New York-AFP) – Eating too much salt can cause high blood pressure, heart disease and strokes.

And now New Yorkers will get that warning loud and clear when they browse a restaurant menu.

New York on Wednesday became the first city in the United States to demand that chain restaurants put salt warnings on their menus in a measure unanimously approved by the health board.

It is the latest in a long line of public health measures, including a pioneering ban on smoking since adopted across the world designed to encourage healthier behavior.

“High sodium intake is dangerous. It is linked to increased blood pressure and risk of heart disease and stroke,” said the city health department.

“With a simple menu icon and statement to alert restaurant customers which items have exceedingly high sodium, New Yorkers will have easily accessible information that can affect their health,” it added.

New York Mayor Bill de Blasio has committed to reducing premature mortality by 25 percent by 2040. Last year, New York raised to 21 the minimum age at which a person can buy cigarettes.

Triumphing over cravings for salt, fat with porous foods

POPULAR HEADLINERS AND CULTURAL PRIDE SHARE THE SPOTLIGHT AT FPAC 21