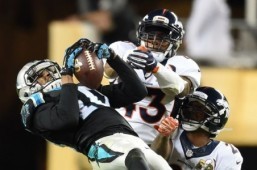 The NFL is trying to reach the growing number of viewers who have canceled their cable TV subscriptions and rely on online sources for news and entertainment.
© TIMOTHY A. CLARY / AFP

The streaming rights had been hotly contested, with Amazon, Verizon and others reportedly seeking to be the first to help the NFL reach viewers outside the normal broadcast channels.

The NFL said in a statement Tuesday that Twitter would stream the 10 Thursday Night Football games, which would also be available on broadcast networks and the league’s own NFL Network.

“This fall Thursday Night Football will be streamed live @twitter so fans will see more of this,” NFL commissioner Roger Goodell said in his first tweet since September 2014.

“Twitter is where live events unfold and is the right partner for the NFL as we take the latest step in serving fans around the world live NFL football,” he said in a statement.

“There is a massive amount of NFL-related conversation happening on Twitter during our games and tapping into that audience, in addition to our viewers on broadcast and cable, will ensure Thursday Night Football is seen on an unprecedented number of platforms this season.”

Terms of the deal were not announced, but the NFL said the agreement will provide “additional reach” for its advertising partners.

Twitter chief executive Jack Dorsey said in the statement that “this is about transforming the fan experience with football. People watch NFL games with Twitter today. Now they’ll be able to watch right on Twitter Thursday nights.”

He also tweeted: “My dad is going to love this.”

The deal is a major coup for Twitter, which has seen its user base stagnate and has been looking for ways to reach more users for conversations on live events.

For the NFL, the deal is seen as the first step in moving outside the traditional broadcast system and will help the sports league reach “cord cutters” without a cable or satellite subscription.

Twitter shares jumped more than 3.5 percent in pre-market trade on the news.

Twitter’s base of monthly active users remained stuck at 320 million at the end of 2015. While that is a big accomplishment, Twitter has failed to keep pace with fast-growing rivals and to expand beyond its base.

The troubles have forced Twitter to bring back co-founder Dorsey as chief executive, but that has not stemmed rumors about a possible buyout or merger.

The move signals a growing trend away from the traditional broadcast and cable television operations to Internet platforms like Netflix and Amazon.

While these platforms have lacked lived sports, that appears to be changing. Some major sporting events like the Super Bowl and NCAA basketball have been streamed, and last year the NFL joined with Yahoo in streaming its first regular-season game.

Bea, Zanjoe together with friends

James Reid talks about working with Nadine on her album