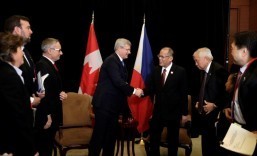 BEIJING, P.R.O.C. – President Benigno S. Aquino III greets Canadian Prime Minister Stephen Harper during a Bilateral Meeting at the Birch Room of the St. Regis Hotel in Beijing, People’s Republic of China on Monday (November 10, 2014), at the sidelines of the 22nd Asia-Pacific Economic Cooperation (APEC) Leaders’ Meeting (AELM). At the core of Philippine-Canada relations is the human dimension – the presence of more than 682,000 Filipinos in Canada. They are among Canada’s most active citizens, contributing to the economic, social and cultural dynamism of the country. Of the total US$ 17 billion remittances from overseas Filipinos in 2010, 10% or about US$1.7 billion came from Canada. Filipinos now comprise the 3rd largest immigrant community in Canada. (MNS PHoto)

Delegates of the APEC CEO Summit asked the President about the role of the government in attaining competitiveness.

The President said that it is his government’s thrust to “level the playing field” for businesses, as well as to correct the interventions between the ways and means to achieve all of the government’s goals.

For instance, he said, the ASEAN will begin integrating next year, and this means the removal of both tariff and non-tariff barriers in a systematical way that does not disrupt economies.

Each member country has varying degrees of advancement and members must try to accommodate each other’s needs and wants to the best degree for collective growth within the ASEAN, including their dialogue partners, he said.

“At the end of the day, it is a review of all the current regulations, ensuring that there is a logical flow from that which we want to achieve and the means towards achieving that,” he said.

This means a review of all of the fiscal incentives that might have outlived their usefulness and the introduction of new incentives for all the investors and businesses to become more efficient in doing business, he explained.

At this time, there is a need for the Philippines to review its laws and regulations so that the country could have a new economic direction, he said. (MNS)