Hobbiton, or The Shire in New Zealand
©Troy Wegman/shutterstock.com

(Relaxnews) – Hardcore fans of “The Lord of the Rings” are being courted in a new luxury travel package developed to mark the trilogy’s 60th anniversary and the upcoming release of the final cinematic installment of “The Hobbit.”

It’s called “The Ultimate Lord of the Rings Tour,” an 11-day trip that’s meant to indulge every LOTF fantasy for fans of the J.R.R. Tolkien trilogy, with visits to The Shire, Rivendell, and Peter Jackson’s production studio and home base in Wellington, Miramar.

The tour, organized by luxury travel outfit Zicasso, was developed to mark the 60th birthday of the trilogy’s first volume, “The Fellowship of the Ring.”

The trip starts in Rotorua, where visitors will be taken on a guided tour of Hobbiton, or The Shire, the bucolic village characterized by Hobbit homes carved into the green hillside, and their round, inviting doors. 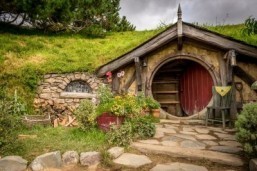 Hobbiton, or The Shire in New Zealand
©Troy Wegman/shutterstock.com

Other trip highlights include helicopter tours of some of the most remote filming areas across New Zealand; an after-hours visit to Weta Workshop where the film’s ethereal settings and scariest characters were birthed; a stay at an LOTR-themed hotel room; and a winery lunch.

Visitors will also be able to revisit key filming locations like the Elven outpost of Rivendell and the Anduin River, where Aragorn was washed ashore after the attack of the Wargs.

And to top it off, fans of Peter Jackson, who brought the fantasy world to life, will be able to pay a visit to his movie studios in Miramar.

Prices start at $7,000 per person. Flights are not included.

Air New Zealand, Tourism New Zealand and Jackson have teamed up to launch a contest that will award the winner a trip to Middle-earth — New Zealand — and the chance to meet the filmmaker himself at a private screening of the final instalment of “The Hobbit: The Battle of the Five Armies.”

If you don’t want to take any chances, visit http://bit.ly/1opgvnI for details on the Zicasso trip.

Kris on being alone: Keribels na