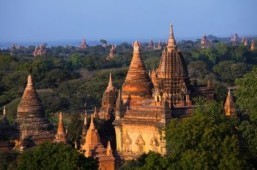 (YANGON-AFP) – Myanmar launched an online visa application on Monday promising an end to painful waits for permits to visit the once secretive nation as it tries to lure five million tourists a year by 2015.

The e-visa is open to tourists from 41 countries, from the United States and Britain to China, Japan and North Korea, Minister of Immigration and Population Khin Yi told reporters.

The entry permit will cost $50 and be valid for 28 days to those arriving at Yangon’s international airport, he said, adding it will take five days to process.

“This is a special moment for our country… as the process improves, we will extend it — more countries will be added in the list,” he added.

Two years in the making, the scheme has cost impoverished Myanmar $17 million but is a step towards wider e-government in a country whose technology lags its regional neighbours after decades of junta rule which stifled investment and the economy.

During military rule tourists arrived in a trickle due to strict vetting by the regime or because they were deterred by international sanctions, which have since mainly been rolled back.

But since Myanmar embarked on democratic reforms in 2011, tourists have started making a beeline for the country — long seen as an undiscovered frontier.

Two million overseas visitors arrived in 2013, according to the Ministry of Hotels and Tourism, with more expected this year.

Drawn by Myanmar’s famous temples, culture and spectacular scenery, visitors are also confronted by expensive or sub-standard hotels and a limited tourist infrastructure.

The country wants to build up the lucrative tourism market, with a new airport planned to cope the surging number of arrivals in Yangon.

Myanmar is targeting five million tourists next year with the e-visa a key part of the strategy, the minister said, adding the system has been backed-up to survive the electrical faults and frequent blackouts that afflict the country.

2015 is a good year to fly for travelers on a budget: report