Shazam, the smartphone app that can identify full songs and tracks from short clips, is at the center of a new game show ordered by US network Fox. 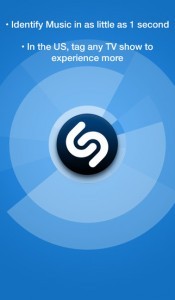 Shazam launched as a smartphone app in 2008; its parent company was founded over 10 years earlier.
© Apple

Just like the app itself, TV show “Beat Shazam” has contestants trying to identify the name and artist or group credited for an untitled track.

The episode’s best contestants are then matched up against Shazam, whose consumer-grade software is available on iOS, Android, and Windows Phones, as well as Mac and Windows computers.

Mark Burnett helped bring “The Voice” from the Netherlands to US television as one of nearly 50 adaptations of the original Dutch programme.

While that vocal talent show is ongoing, with its 11th season set to start mid-September, Fox is bolstering its own musical output after “American Idol” wrapped up a fifteen-year run in April.

Fox had two seasons of “Don’t Forget the Lyrics” from 2007 onwards, and one of that show’s producers, Jeff Apploff, is also involved in “Beat Shazam.”

It’s one of a number of recent television orders for game shows based on smartphone apps.

Draw Something was a sensation when it released on iOS and Android in February 2012, with Facebook integration key to its success.

Not much more than a month later, the social picture-drawing game and its studio were subject to a $183m purchase by the social gaming titan at the time, Zynga.

The Pictionary-style game was picked up by CBS, and though it is yet to materialize on US TV, UK network Channel 4 ended up airing eight weeks’ worth of “Draw It!” on weekdays during the first half of 2014, though the show was not subsequently renewed for a second season.

Currently in development is another app-to-show venture also associated with Apploff, with Plain Vanilla Games, the studio behind the QuizUp app, having netted deals with both NBC owner Universal as well as another UK channel, ITV.

Having endured stiff competition from mobile rival “Trivia Crack,” the knowledge-testing game is looking to provide a broad overlap between its socially-driven multiple-choice app and the potential show. Glu Mobile, the gaming titan du jour, is also backing it, via an interest in Plain Vanilla Games. “QuizUp America,” if it works out, is currently anticipated before the end of the year.

AMID LEGAL BATTLE, NADINE LUSTRE TO STAR IN VIVA PROJECT