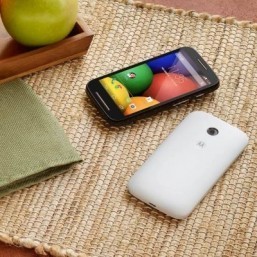 The Moto E
Moto E is aimed at consumers making the step up from a feature phone to a smartphone.
©Motorola

(Relaxnews) – The first handset from the company since it was sold to Lenovo, the Moto E offers an excellent balance of performance and price and could be the ideal entry-level phone for any consumer anywhere in the world ready to dump their feature phone in favor of their first smart handset.

Motorola has planned a series of launch events over the next 24 hours in different countries but at the first, in India on Tuesday morning, the company officially took the wraps off its third ‘Moto’ branded handset, the Moto E.

Like the Moto G and Moto X, the new phone has the same rounded corners, slightly curved backplate and will be available in a range of colors. It boasts a 4.3-inch display with a resolution of 540×960 pixels.

Though not full HD, it works out as qHD —  256ppi — so will be fine for streaming videos but not so brilliant for intense gaming. However, it’s not designed as a gaming handset; it’s designed to offer as many people as possible access to mobile internet, apps and the best that Android has to offer.

Therefore, although it only has a dual core, 1.2GHz A7 Snapdragon processor, it has a full 1GB of RAM and they’re working together to run Android KitKat, the latest and smoothest version of the operating system (which is currently only running on 10 percent of the world’s 1 billion+ Android handsets).

Making performance even swifter is the fact that Motorola has resisted the urge to overlay a skin or any other fripperies on the OS.

The rear-facing camera is a very promising 5 megapixels and although there’s only 4GB of storage on board, there’s support for MicroSD cards of up to 32GB for making more space for music, photos and films.

By saving money on things like onboard storage and processors, Motorola has been able to invest in other areas of the phone. It is encased in Gorilla Glass so it can handle the knocks and scrapes of daily use and by lowering some performance parameters, battery life is also boosted.

The company claims a full day of real world use between recharges, something that feature phone owners — who are going to make up the bulk of the phone’s customers — take for granted.

Last but not least is the price. In India, the Moto E will cost just 6,999 rupees (that works out at around $117). While in the UK, and US where it will also go on sale this month it will cost £90 and $130 respectively as an off-contract handset.