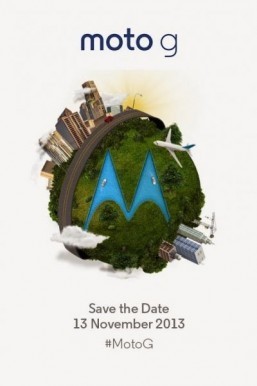 Moto G Save the Date launch notice
Motorola has chosen Sao Paulo, Brazil as the location for its Moto G smartphone launch event on November 13.
©Motorola

(Relaxnews) – Motorola has chosen the Brazilian city as the venue for its latest global smartphone launch, which will be streamed live over the internet on November 13.

Expected to be a budget version of the company’s US-only contextually aware Moto X smartphone, earlier leaks suggested that the handset would be arriving in Europe before the holiday season but now Motorola has confirmed that the phone will be launching globally and that the company is doing away with the usual launch locations of New York and California in favor of somewhere a little more exotic.

Universally regarded as one of the most important emerging markets for consumer technology, choosing Brazil for the big reveal confirms earlier reports that the handset will have robust mid-range specifications and features but will be priced extremely competitively in order to give budget handsets some serious competition.

The phone is expected to have a 4.5-inch display, 8GB of internal storage, a 1.2GHz Snapdragon processor, 5-megapixel rear camera and a 5-megapixel rear-facing camera and will retail without a contract for around €160 and, with the full reveal scheduled for 9am EST on November 13, we have less than a week to see how closely the rumors mirror reality.

Google has set up a dedicated Google+ page so that consumers can sign up for more information about the device and so that they can follow a live stream of the event. It can be accessed via Google+.