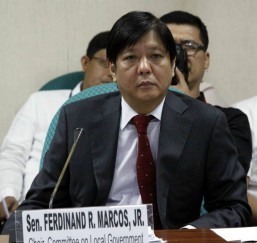 MANILA (Mabuhay) — The chairman of the Moro National Liberation Front (MNLF) central committee on Monday asked for the immediate passage of the Bangsamoro Basic Law.

“The people of Mindanao no longer want war… The BBL must be passed and implemented as a model for the country,” he added.

In an impassioned part of his speech, Alonto said further: “Carpe diem! Do it now! Pass the BBL while the veterans of [the] Mindanao war are still around to help.”

According to Sen. Ferdinand Marcos Jr., representatives from the MNLF were invited to the hearing as their group has been “at the forefront from the beginning.”

Earlier, he said the BBL posed a problem to the implementation of the government’s peace agreement with the said group.

70% of Americans have high-speed Internet: study

Works of FilAm Artist Alfonso Ossorio on Exhibit in D.C.

Get free tickets to see Anne Curtis: No Other Concert at the Pechanga Theater