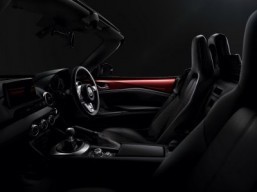 The 2015 Mazda MX-5
Even the cabin has had a major overhaul.
©Mazda

(Relaxnews) – Hardcore fans can breathe a sigh of relief and new customers should get excited. The new Mazda MX-5, revealed simultaneously at special events in Los Angeles, Barcelona and Tokyo, has lost none of the poise, promise or performance that have helped it sell nearly 1 million examples over the last 25 years.

In fact, the fourth-generation model is lighter, safer and faster than the model it’s replacing.

Mazda won’t be revealing performance figures or engine sizes until the new car arrives in France for the Paris Motor Show in October but there are suggestions that it will be offered with both a 2-liter and 1.5-liter petrol engine. 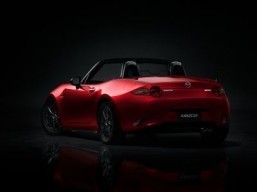 But output is only one part of the equation when it comes to creating a car that’s fun to drive; how it holds the road and uses that power are much more important and Mazda has confirmed that as well as being 100kg lighter, the new car has perfect 50:50 weight distribution and is shorter and slightly wider than the third generation model. All of which is very promising.

As is the car’s economy: the new model uses Mazda’s Skyactiv engine, transmission and chassis technology that boost efficiency while trimming weight. 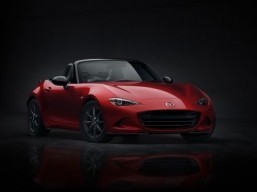 But as well as shedding a few pounds, the new car’s cabin is a big improvement over MX-5s of the past. Quality is better in terms of materials, fit and finish and there’s a new touchscreen infotainment system to boot. It’s still snug, but that’s a good thing, as it helps with feedback when driving and will make you feel part of the car — this is of critical importance for any vehicle that markets itself as being fun and involving to drive.

Longtime MX-5 customers will also notice that the new car is lower to the ground, as is the driving position, and that’s one of the reasons why the new car has a more noticeably slanted hood. As well as helping it slice through the air, it also improves visibility.

When the car goes on sale in 2015 it will come with an electrically powered canvas soft top but a metal folding roof version will be added to the range at a later date.

The best smartphones for the beach