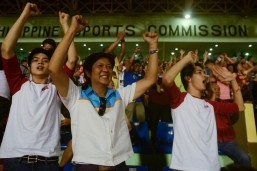 MANILA, May 12 (Mabuhay) – The camp of Senator Ferdinand “Bongbong” Marcos Jr. must present election returns and hash codes to prove allegations that the results of the vice-presidential election are being rigged, an IT expert said Thursday.

IT expert Lito Averia made the claim after the legal team of Senator Marcos said there were alleged irregularities in the quick count of the vice-presidential race.

The Marcos camp said the poll irregularities started after a new script or computer command was introduced to the Commission of Elections transparency server during the quick count of the vice-presidential race. They alleged that the execution of the purported command resulted in the alteration of the “hash codes of the packet data”.

Averia, an information technology expert from the National Citizens’ Movement for Free Elections (Namfrel), explained a hash code serves as the unique “fingerprint” of every computer document.

Data packets transmitted by VCMs to the Comelec are electronic files and would thus have individual hash codes.

One may verify if a data packet was tampered with by running a program to regenerate its hash code. The hash code of the data should be identical before and after it was transmitted to Comelec servers.

But Averia said altering hash codes would only affect vote count on the Comelec transparency server.

This, he said, would not cover election returns which would be used in the official vote canvassing by Congress.

To successfully cheat in the quick count and official canvassing, Averia said one must doctor election returns before VCMs transmit the data.

A new corresponding hash code should also be made for each election return, he said.

Averia said anyone who has access to the vote counting machines can easily do this in less than a minute.

Averia said the results should be identical in the quick count and official canvassing.

Averia said the Marcos camp should first present evidence such as election returns and corresponding hash codes before presuming that “dagdag-bawas” or vote padding-shaving happened in the elections.

He said Namfrel has no way to verify the authenticity of election returns.

He also explained an alleged irregularity during the quick count of votes on Monday night, when votes for Senator Francis Escudero were reduced while those for administration bet Leni Robredo rose.

He said this occurred due to human error in the encoding of data and regeneration of hash code.

Averia said the error has already been corrected.

Christmas all wrapped up