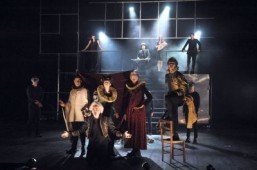 A file photo taken on June 25, 2014 at the Theatre National de Bretagne, in Rennes, western France, shows actors from the troupe “La Piccola Familia” performing during a rehearsal of “Henri VI”. Theatre-goers gave a long standing ovation at dawn on July 22, 2014 at the end of the first performance of “Henry VI”, by young French director Thomas Jolly, who remained extraordinarily faithful to Shakespear in his 18-hour-long rendition of “Henry VI”.
©AFP PHOTO / THOMAS BREGARDIS

The play began at 0800 GMT on Monday at the Avignon Arts Festival and ended at 0200 GMT Tuesday. It will be held two more times in the southern French city before being staged elsewhere — but only in shorter parts.

After graduating from drama school in the northwestern city of Rennes in 2006, Jolly got a few students together to create a theatre company he named “Piccola Familia”, or Little Family.

Three years later, Jolly said he decided to stage Henry VI — a three-part play — in one go despite huge odds.

“We were a very young company, six at the time… and it’s a project thought to be impossible to put together,” Jolly said.

“It took time to convince people: too heavy, too expensive, too many people,” were the arguments against it, he said.

“Henry VI is not just a story of two families — Lancaster with a red rose as its emblem and York with a white rose that chase after each other to know who will be king — but more a portrait of a century in revolution,” Jolly said.

“Everything changes between the 15th century described in the play and the 16th century of Shakespeare: printing is born… Galileo declares that the earth is round, navigation and trade explode”, and Protestant Reformation emerges which questioned a lot of prevailing Christian ideas, he added.

The play is set against the backdrop of the Wars of the Roses — a series of dynastic wars for the throne of England pitting two rival branches of the royal House of Plantagenet: York and Lancaster.

The conflict resulted from social and financial troubles that followed an earlier and long drawn war, combined with the mental infirmity and weak rule of Henry VI, which revived interest in the alternative claim to the throne of Richard, Duke of York.

“It is pertinent to see how the king has no power, like the politicians we have elected and who seem impotent,” Jolly said.

The play — which actually runs for 13 hours minus intervals — features several anachronisms such as rollerblades used by a royal messenger and a red telephone.

It is not the first time that Avignon has seen marathon plays.

‘Books Across America’ gets books in hands of young children with help from ‘The Dr. Oz Show,’ UPS, Scholastic, and The National WIC Association

Uma Thurman to track down Kristen Stewart and Jesse Eisenberg