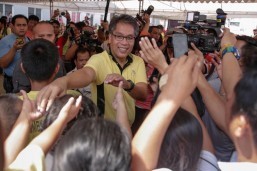 Liberal Party standard-bearer Mar Roxas meets with residents of a National Housing Authority project in Camarin, Caloocan on Thursday. The visit comes less than a week before the official filing of certificates of candidacy for the 2016 polls.(MNS photo)

MANILA, Oct 9 (Mabuhay) — Will Sarangani Rep. Manny Pacquiao be among the ruling Liberal Party’s 12 senatorial candidates in the coming 2016 elections?

Pressed on whether he personally met with Pacquiao, Roxas’ reply was: “As recent as two nights ago.”

Roxas said this in an ambush interview after new LP members took their oath at the party’s Balay headquarters in Cubao, Quezon City.

Earlier this week, Pacquiao confirmed that he will run for senator in the May 2016 elections.

He did not, however, specify to which party he will run under.

The eight-division boxing champion is on his second term at representative of the lone district of Sarangani.

The LP is set to announce its complete slate by Monday, October 12.(MNS)

Palace on next step after arbitration ruling: ‘Top priority will be national interest’

PH, SoKor to continue working together vs. Covid-19, terrorism