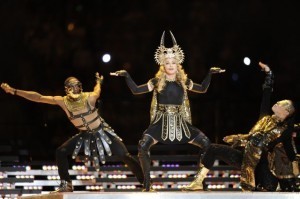 (LOS ANGELES-Relaxnews) – This year’s Super Bowl XLVI championship game for American football, won by the New York Giants, was watched by a record-breaking 111.3 million US fans, slightly beating last year’s event by just 300,000 viewers as the highest rated show ever on US television.

In 2011 the game drew 111 million fans to see the big game, edging out the previous record holder for most-watched television show, the finale of M*A*S*H* in 1983, which held the record for 27 years with 106 million viewers, per The Hollywood Reporter.

According to NBC Sports, Madonna’s performance was the most-watched Super Bowl halftime entertainment. In fact, with 114 million viewers, the singer’s show, from 8 to 8:30 pm ET, won more viewers than the game averaged — though at its peak, the game reached 117.7 million.

Her performances of “Vogue,” “Like a Prayer” with Cee-Lo Green, “Gimme All Your Luvin'” with Nicki Minaj and M.I.A. and “Music” with LMFAO garnered up to 10,245 tweets per second, getting mixed reviews.

TiVo, the DVR firm, confirmed that the halftime show was watched more than the game, except for a few scoring moments, which included rewinding to rewatch.

Claire Danes gets star on Hollywood ‘Walk of Fame’