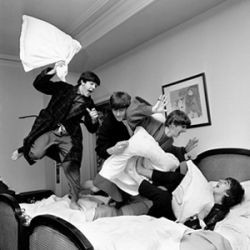 (Relaxnews) – Beatles fans who are Paris-bound this summer may want to add the Four Seasons Hotel Georges V to their itinerary, as the luxury landmark — where the band wrote one of their most iconic songs — will pay tribute to the music legends in a photo exhibit.

The photos, taken by Harry Benson, capture intimate moments of the quartet at the hotel, including an impromptu jam session at the piano between John Lennon and Paul McCartney, which led to the writing of their hit song “I Feel Fine,”

Benson, who was the tour photographer and was in the suite at the time, immortalized the moment on camera.

The George V also bore witness to another moment of Beatles euphoria, as it was while gathered in one of their suites that the band learned that their song “I Want to Hold Your Hand” had topped the charts in the US and that they were invited to appear on “The Ed Sullivan Show.”

After learning that the band had broken out into a pillow fight a few nights earlier, Benson asked them to recreate the playful event.

But as the Four Seasons explains: “At first, they were not too keen. Lennon feared this would make them look too childish. However he sneaked up behind Paul McCartney and hit him on the head with a pillow. This turned into 15 minutes of priceless shots that would lead to the legendary photo of their pillow fight seen worldwide.”

The negatives of the photos were also developed in the hotel bathtub.

In other photographer hotel collaborations, model and photographer Helena Christensen shot photos of her travels throughout Peru, in her role as a Global Explorer ambassador for Starwood’s The Luxury Collection Hotels & Resorts earlier this year.

Christensen’s photos of The Luxury Collection brand around the world will be seen throughout the year.

The Beatles “I Feel Fine” photo exhibit marks the 50th anniversary of the band’s historic stay at the hotel, and will be set up in the lobby June 15 to 30.

Fox bets on series set in ancient Egypt for 2014