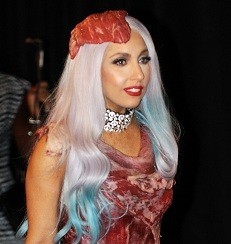 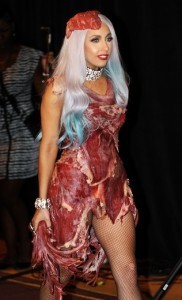 (WASHINGTON-AFP) – The raw meat dress worn by Lady Gaga at a 2010 awards ceremony will go on display Friday in the US capital alongside a fox fur worn by Billie Holiday and boots sported by Patti Smith.

The dress made out of raw beef, which caused a sensation at the MTV Video Music Awards in Los Angeles two years ago, will be part of an exhibition on women singers at Washington’s National Museum of Women in the Arts.

The dress, which still belongs to the singer, was chemically treated by taxidermists to preserve it and painted red to make it appear “fresh.”

The piano on which the eccentric performer played her first chords is also on display, along with some 250 objects associated with 70 artists from 1920 to the present.

“Women Who Rock; Vision, Passion, Power” was organized by the Rock and Roll Hall of Fame in Cleveland, Ohio to highlight “the essential roles women have played in moving rock and roll and American culture forward.”

Other objects on display include a red jacket worn by Chrissie Hynde of The Pretenders, dresses worn by The Supremes, a Jean-Paul Gauthier gown worn by Madonna, a handwritten notebook that belonged to Janis Joplin and a guitar belonging to Taylor Swift.

The exhibition runs to January 6, 2013 and will then be displayed in Omaha, Nebraska, Seattle, Washington and Phoenix, Arizona.

Woody Allen’s next film gets a title, first photos