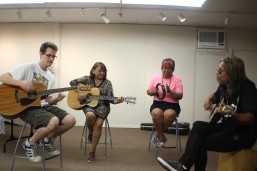 VETERAN singer Mon Concepcion, as the workshop begins, asked me for my definition of songwriting. I groped for words. I wanted to say the work of writing songs but I thought that the definition was too dry. Fortunately everyone put in his/her two cents and we came up with this definition: Telling stories with words and music.

That was better. That’s a definition that suits an artists’ sense.

The dictionary defines song as a short musical composition of words of music. To the uninitiated, this may be a sufficient definition. But to the songwriter, the definition is deficient because it fails to suggest the other essentials of a song, among them: the art, the emotion, the message, the rhyme, the movement, the color, the loudness and, oh yes, also the silence that he puts in it. And every song, before I forget, is always dedicated to someone or something.

A songwriter is popularly known as a composer but I prefer songwriter for almost the same reasons.

But of course, like other forms of art a song can be technically analyzed. It can be dissected because it has parts or formal sections (commonly known as verse, chorus, bridge, hook and refrain). It can be categorized into the form or genre where it could belong. And it can be aesthetically rated from a preferred perspective.

But we didn’t come close to perform any of these, mainly due to lack of time and our own desire not to go there. As it was mainly a gathering of artists, it turned into a conversation into the processes that we went through writing songs.  Why? Where? When? Which came first? The music or the lyrics?

What drives an artist to create is varied. To some, it is maybe ambition. But for most artists, it is simply for the joy of living out the art in them. For the joy of sharing their songs to one or two people. For the excitement of putting a song out in the open and wonder if it could take a life of its own.

The good news is, La Habra Art gallery is going to be hosting some more of these workshops. And who knows, who’s coming next? But on that Saturday night, we had Adam  Schaudenecker, a young man from Chicago who called himself a musical cartoonist (he just came in town apparently chase his Hollywood), writer and poet Fe Koons, hosts Mon Concepcion, Luz Balbin-Spanks and her husband Jim.

All shared original songs and we talked about them for a little a bit. But for most of the time, we just jammed.

The best of both worlds: Samsung’s new mobile hybrid notebook