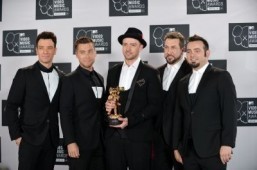 Timberlake, wildly cheered and applauded by the crowd packed into the Barclays Center in Brooklyn, received the night’s most important prize — the Michael Jackson Video Vanguard award for career achievements. He also won the Video of the Year award for the song “Mirrors.”

Timberlake wowed his fans by singing a medley of his best-known tunes, including “SexyBack,” “Cry me a River,” “Senorita,” “Suit and Tie,” and “Rock your Body” — then the four members of his former group joined him to perform two of N Sync’s best-known hits, “Girlfriend” and “Bye Bye Bye.” The 1990s hit boy band broke up on 2002.

The packed arena was thrilled, and stars like Lady Gaga, Taylor Swift and Selena Gomez stood and danced at their seats.

“I don’t deserve this award but I’m not going to give it back,” Timberlake said as he accepted the prize.

Late night TV comedian Jimmy Fallon, who hosted the ceremony, described Timberlake as a “legend” and dubbed him the “President of Pop.”

Singer Bruno Mars won an award for Best Male Video for his hit “Locked Out of Heaven,” while country/pop diva Taylor Swift won the Best Female Video award for her song “I Knew You Were Trouble.”

“I want to thank the person who inspired this song, who knows exactly who he is, because now I’ve got one of these,” she said as she accepted the award.

The TV cameras then focused on Swift’s ex-boyfriend Harry Styles, a member of the British hit boy band One Direction.

The award for Best Pop Video went to Swift’s gal pal Selena Gomez — delivered to her by the five One Direction boys — for the visuals to her song “Come & Get It.”

Stars that performed at the event included Kanye West, Jennifer Hudson, Bruno Mars, and Lady Gaga. Katy Perry sang from a mock boxing ring set up under the Brooklyn bridge.

Former “Hannah Montana” star Miley Cyrus, clearly aiming to show that she was beyond the days of the Disney TV show, sang her summer hit “We Can’t Stop” in a tight leotard, thrusting out her tongue and waving her microphone near her crotch.

She then stripped down to what appeared to be her underwear and remained on the stage, gyrating her hips and using a large foam hand as a sex prop, for a raunchy performance of “Blurred Lines” along with singer Robin Thicke.

Lady Gaga opened the show with her new single “Applause,” and changed into outlandish costumes before ending in a bikini of giant seashells which she wore for the rest of the night.

The first MTV awards were handed out in 1984. Winners receive a statuette of an astronaut on the moon, known as a “Moonman” award.

B-52 flights meant ‘America is here’: US envoy