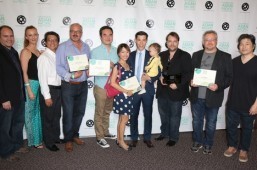 Best Ensemble Cast went to Ktown Cowboys directed by Daniel Park. Li Lu’s There’s A New World got the best first feature award. Anthony Ma and Brandon Soo Hoo both won respectively for best new actor for Love Arcadia and Everything Before Us. Best animation in a non animated film went to Man Up directed by Justin Chon. 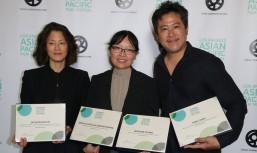 THE TEAM FROM ADVANTAGEOUS, WINNER OF MULTIPLE AWARDS AT THE 2015 LAAPFF, CELEBRATES ON CLOSING NIGHT AT THE DGA. FROM LEFT TO RIGHT: ACTRESS JACQUELINE KIM; DIRECTOR JENNIFER PHANG; COMPOSER TIMO CHEN. (PHOTO courtesy of STEVEN LAM)

In the documentary competition, directors Samantha Futerman and Ryan Miyamoto won the Grand Jury Prize for the film Twinsters. The film tells the real life story of co-director Futerman finding her twin sister on social media by accident.  Futerman and her twin sister were separated in Korea when they were adopted by separate families – one in the US and the other in Europe.

Best Documentary Director award was given to Jim Choi for Changing Season; Best Cinematographer prize was bestowed on Patrick McLaughlin for his work on Everything Will Be; and Best Editing went to Sara Newens and Summers Henderson for Top Spin. A special jury prize was awarded to Kimberlee Bassford for Winning Girl. 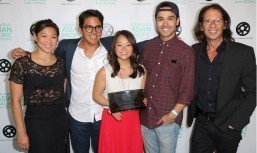 The Killing Of Dr. Haing S. Ngor from award winning filmmaker Arthur Dong took home the Audience Award in the documentary arena; and How To Win At Checkers (Every Time) by Josh Kim won the Audience Award for Best Fiction Feature.

The LAAPFF presented over 102 short films. The dramatic film of Patrick Yeung 90 DAYS received the Golden Reel Award, while Ken Ochiai was honored with the Linda Mabalot New Directors/New Visions Award for his musical short Juliet Juliet – The Sound Of Love Musical. 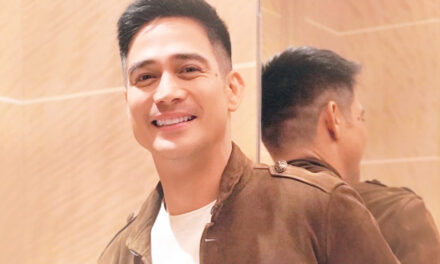