“Confirmed,” Manila PIO chief Julius Leonen said when asked if Moreno will join the presidential elections in 2022. He also confirmed that Ong will be Moreno’s vice president.

The formal announcement of the Moreno-Ong tandem will be held on September 22, Wednesday, Banayo added.

According to Banayo, Moreno chose Ong as candidate for vice president because the latter may help address the COVID-19 pandemic.

Moreno told the Manila City government officials to focus on serving their constituents after he made the announcement of his candidacy.

“Tuloy ang gobyerno. (The government is still here.) We’re still here. I’m going to have to do what I have to do as the Mayor,” said Moreno.

Ong earned his medicinal degree from De La Salle University, and is also a previous consultant for Department of Health.

Ong ran for senator in 2019 under the Lakas-Christian Muslim Democrats.

Meanwhile, Banayo said they have yet to choose senatorial candidates.

Moreno previously had a meeting with Vice President Leni Robredo and Senator Manny Pacquiao regarding elections prior to filing of candidacy in October.

The Vice President said on Sunday she is more than prepared if she is chosen to be the opposition’s “unity candidate.”

Pacquiao, for his part, on Sunday accepted the nomination of the PDP-Laban faction to be the party’s presidential candidate in the upcoming national elections.

The filing of certificates of candidacy for national and local positions has been set for October 1 to 8, the Commission on Elections said.

The Manila mayor is the president of the Aksyon Demokratiko political party.

It was also previously bared that opposition coalition 1Sambayan is choosing between Moreno and Robredo as it possible standard bearer.(MNS) 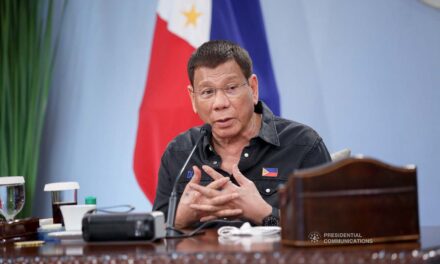 DUTERTE INSISTS ALL PINOYS MUST BE ALLOWED TO RETURN HOME