Is Sony getting ready to launch the world’s first UHD smartphone? 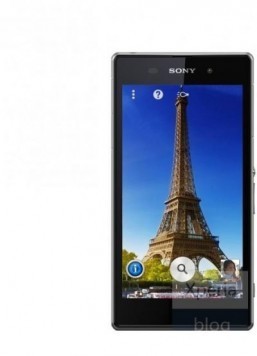 Leaked render Sony Honami
The leaked images suggest the smartphone has no dedicated homekeys on its front but does have a camera operation button on its side.
©Courtesy of Xperia Blog

(Relaxnews) – The latest leaked images and specifications suggest that Sony’s new handset in question is a new flagship device that will be capable of shooting video and a scarcely believable 4,000 x 2,000 pixel resolution.

The phone in question, codenamed the “Honami” (but most likely to be called the Xperia Z when it launches) is believed to have a 20 megapixel image sensor and, if the specifications are indeed accurate, can take 55 megapixel still photos. All of these imaging capabilities would be wrapped up in a high-quality metal casing that does away with homekeys in favor of a full touchscreen interface but does include dedicated side-mounted buttons for camera operation.

And the “Honami” might just also be Sony’s answer to the current dilemma surrounding Ultra-high-definition TV. Offering a resolution four times greater than existing HD, looking at an UHD TV is like looking out of an impeccably clean window, such is the level of detail and depth and contrast of colors. Set to be one of the next big things in future consumer technology, UHD TV technology is stuck in a chicken-and-egg situation at the moment. UHD TVs are expensive and won’t start to come down in price until more consumers start buying them, while consumers aren’t prepared to buy them until there is something out there to watch. There is currently next-to-no native UHD content available anywhere in the world. Broadcasters won’t adopt the standard until UHD is more popular and consumers won’t adopt the technology until broadcasters adopt it. Thus far, the first scheduled nationwide UHD broadcast will be the final of the 2014 FIFA World Cup and will be exclusive to viewers in Japan

With this device, Sony, which is one of several firms really pushing UHD, would be putting a tool for UHD content creation in the hands of consumers, letting users create their own UHD videos with nothing more than a smartphone.

Sony would be the latest company to focus its smartphone efforts on photography — as well as UHD and stills, the handset would be able to shoot in 3D and come with a number of imaging apps built in — and in that respect Sony would be following a growing trend seen at brands from Nokia and HTC to Samsung.

And while Nokia’s Pure View technology and Samsung’s Galaxy SIV Zoom (the first phone with a 10X optical zoom lens) are both impressive, by enabling a simple smartphone to shoot in UHD, Sony is really taking things to the next level.

Crowdfunded salad and ‘babygate’: a look back at some of the big food stories of 2014

Explanation is the key to keeping kids safe: researchers