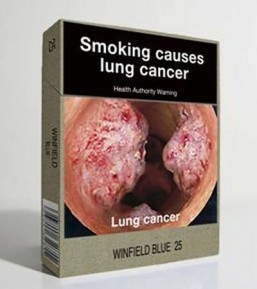 Under the new rules all forms of branding, including logos and colours will be banned and all products will have have a uniform packaging with graphic health warnings.

“We are creating legislation which will be historic and will be of real importance to the area of public health,” the minister for children James Reilly told parliament Thursday.

It follows Australia’s introduction of similar plain packaging legislation in 2012.

The legislation had cross-party support and passed without a vote.

It will be sent to the president to pass into law after a techincal vote in the upper house next week, although full implementation of the rules will not be effective until May 2017, when all existing packaging must be removed from sale.

Other EU countries, such as Britain, have indicated they will introduce similar rules.

Dublin’s move has been met with fierce opposition by tobacco companies who have threatened Dublin with legal action.

“We in this house will not be intimidated by such action. We will pass such laws as we believe to be correct,” Reilly said.

“Remember if a bully tries to intimidate you with actions you should stand firm and be true to what you believe to be right,” the minister added.

Earlier this month JTI Ireland, owner of the Benson & Hedges and Silk Cut brands, said they would take legal action if the legislation is enacted.

In a statement to AFP after Thursday’s vote, a spokesperson for JTI Ireland said: “We have made our views known to the government many times so they should come as no surprise.

“If this proceeds we will go to court to protect our rights.”